The scholars at Antioch rejected allegory in favor of history. But their interpretive method led some into heresy.
Steven Gertz

There are people who take great pains to twist the sense of the divine scriptures," wrote the fourth-century biblical scholar, Theodore of Mopsuestia, a prominent voice of the exegetical school centered at Antioch, "and make everything written therein serve their own ends. They dream up silly fables in their own heads and give their folly the name of allegory. They misuse the apostle's term as a blank authorization to abolish all meanings of divine scripture."

At the beginning of the third century, Origen of Alexandria introduced to the church an exegetical method that searched for the hidden, spiritual meanings of Old Testament passages, treating the Old Testament as a great allegory of Christ. Most biblical interpreters who followed him worked in this tradition.

But not all. A few Christians recognized the danger posed by the allegorical method. Someone must hold the "spiritualizing" interpreter accountable, or Scripture meanings might be warped into forms the biblical authors never intended.

As Paul once said of Tarsus, Antioch was "no mean city." We know it as the place where Jesus' followers were first called "Christians," but its secular fame was also well-established. Founded three hundred years before Christ, this city on the Orontes River in modern-day Turkey became the Roman empire's third largest city.

Antioch stood at an east-west crossroads and exerted enormous cultural and political influence throughout the empire. "In what land or sea had the fame of this city not entered?" asked Libanius, chief rhetorician of the Hellenistic school in Antioch. "Attractions of all kinds bring people from all sides [of the empire], from Africa, Europe, Asia, from the islands, from the mainland." 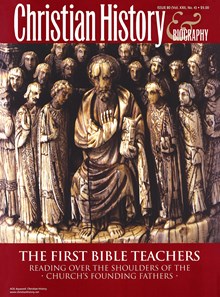