Methodist holiness advocates said their movement had started with John Wesley. They were just reminding Methodism of its founder's teachings on entire sanctification or "perfect love"-the complete orientation of the heart toward God and away from sinning.

Camping out (in style) for Christ

During its post-Civil War "camp meeting phase," the holiness revival spread quickly beyond Methodism's bounds. In 1887, Presbyterian minister A. B. Simpson founded the non-Wesleyan Christian and Missionary Alliance (C&MA) on the teachings of Christ our Savior, Sanctifier, Healer (a common holiness theme by the 1890s), and Coming King. For many years, the C&MA held annual camp meetings at a former temperance campground in Old Orchard, Maine.

The Methodist holiness folk were known for their traveling evangelists-male and female. One day, on the "gospel trail" with her organist Treena Platt, evangelist Mary Cagle's pony became ill. Having heard that John Wesley had once prayed successfully for the healing of his horse, Cagle decided to do the same. "I don't know how to pray for a horse," Platt protested. "Pray just like you would for a person," said Cagle; "we need her in the service of the Lord." Cagle wrote in her autobiography that they "prayed through to victory" in the house and then went to the barn to find the horse already mending. (Contributed by Jennifer Woodruff Tait.)

Reaching the lowest of the low

Many holiness workers followed in the footsteps of Phoebe Palmer, bringing spiritual and physical help into such poverty-stricken and seemingly godforsaken places as the tenement described in an 1854 report of New York's Five Points district: "Open that door-go in, if you can get in. There is no bed in the room-no ... 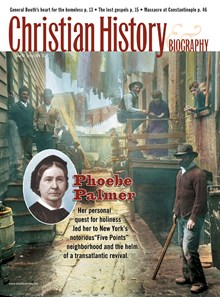