After the Council of Nicaea, the real fight for the divinity of Christ began.
Christopher A. Hall 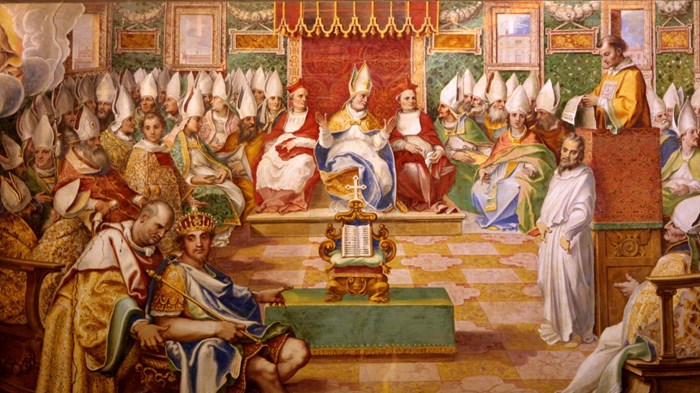 A fresco from the Sistine Chapel depicting the Council of Nicaea
Current Issue
January/February 2020Subscribe
Read This Issue
Subscribe to Christianity Today and get instant access to past issues of Christian History!
Follow @ctmagazine
Free Newsletters
Get the best from CT editors, delivered straight to your inbox!

At the Council of Nicaea, Arius and his ideas lost. But for decades after the council, it appeared that an Arian perspective on the person of Christ would carry the day and the conclusions of Nicaea would disappear in a theological and ecclesial dustbin. Why? The Roman emperors were an important influence. A series of emperors (beginning with Constantine) understood their role to include the right to intervene in the affairs of the church, particularly when division within the church threatened the unity of the Roman Empire itself. Thus, if a Roman emperor was disposed favorably toward Arian ideas—as Constantius and Valens were—bishops supporting the creed formulated at Nicaea could be severely punished, most often by being deposed and exiled. If an emperor favoring Nicaea was in power, Arian believers would suffer.

Yes, the bishops of the church continued to play the major role in interpreting Scripture and constructing theology based on biblical exegesis. Yet behind the bishops and presbyters during and after the Council of Nicaea stood a series of Christian Roman emperors more than willing to intervene in the church's affairs and doctrine. When a series of pro-Arian emperors arrived on the scene, Arianism spread like wildfire.

Take the case of Constantine himself. Concerned over the growing rift within the church over Arius's ideas, Constantine both convened and intervened in the Council of Nicaea. Rowan Williams observes that when Constantine viewed Arius as a schismatic, the emperor penned a letter to Arius "and his supporters which is extraordinary in its venom and abusiveness, dubbing Arius an 'Ares,' a god of war, who seeks to create strife and violence."

Constantine was not averse ...

How Arianism Almost Won
Hide This

This article is from Issue 85 of the Christian History archive.