In India, every living thing is seen as having features intrinsic to its "birth" (jat). Among people, there are roughly 3000 separate "birth groups" or "castes" (jatis), each so ethnically distinct that, by tradition, intermarriage and interdining between castes has been unthinkable. No two of these castes can be mingled or mixed, it is believed, without causing cosmic chaos or confusion. (To do so would be like mating a chicken with a cobra.)

Thousands of years ago, Brahman elites began to devise and perfect a system for ranking castes according to degrees of inherited "purity" or "pollution." They fitted jati or caste into a hierarchical social structure of four categories. Each category or class, symbolized by a "color" (varna in Sanskrit), contains hundreds of castes. (See table below.)

Every male belonging to a caste within the top three varnas is "twice born" (dvija). Initiated at the age of eight, when "sacred and secret" family knowledge is whispered into his ear, he begins rigorous training in unique family skills. Each person's inherited knowledge (veda) is sacred. Together, all castes within the three highest varnas make up roughly 15 percent of the population (5 percent in each varna). Shudras are called "once born" and number 40 to 50 percent of the entire population.

As if this were not complicated enough, two groups of castes fall outside this ranking system. The first category, constituting some 15 percent of the population (or an estimated 200 million), has many names: avarnas ("colorless," hence unseen), Panchamas ("fifths"), outcastes, untouchables, depressed classes, or Scheduled Classes. Gandhi's name for them, Harijans ("Children of Krishna") is abhorred. They now call themselves Dalits—"crushed" or "oppressed" peoples. They are still viewed as extremely polluting and subhuman, little better than animals or livestock, and used for the most disgusting or polluting of tasks (cutting carcasses, working leather, or removing dung). They are allowed to dwell only "outside the village," far from proper wells or temples, and have often been subject to debt bondage and other atrocities.

Also beyond the pale are the adivasi (aboriginal or tribal) peoples. Living freely on forested frontier escarpments, these fierce warrior peoples refuse to submit to subhuman status and deliberately remain beyond the reach of either Sanskritic or Islamic domination. Avarnas are thought by many to be "domesticated" adivasis—people who are no longer wild or dangerous.

Muslims, Sikhs, Christians, Buddhists, Jains, Parsis (Zoroastrians), and others, while technically outside the caste system, are also stratified, ranked higher or lower depending upon lineages and styles of life, so that no one can totally escape being categorized in a caste.

When a person from a caste in one of the varnas converts to Christianity, whether that person becomes outcaste in the eyes of his or her own community depends on at least two factors: whether "pollution" has occurred (for example, through ingestion of polluting substances or through intermarriage) and whether a formal excommunication has been pronounced. Even so, in violation of Christian doctrine, Brahmans who become Christians tend to be seen as "Brahman Christians." Similarly, within churches, Shudra Christians and avarna Christians tend to remain separate, as do different adivasi tribes such as Naga Christians and Mizo Christians—with the result that there are hundreds of "hyphenated" Christian communities. Dual identity remains a serious challenge to Christian witness in South Asia. 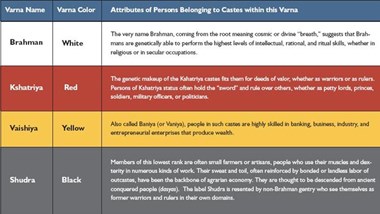 Hindu: Anything that is native to India, especially Indian culture, hence not exclusively referring to "Hinduism." Thus there can be Hindu Muslims and Hindu Christians.

Hinduism: A term invented by Europeans, especially Christian missionaries, as a way of integrating into one concept all of the diverse ideas, religious practices, and institutions they discovered in India.

Sanskrit: The sacred or "divine" language of ancient India, codified by Panini around 400 B.C. Most classical texts are written in Sanskrit. No longer a living language, like its distant cousins Greek and Latin, it is still much studied and used for religious exercises, worship, and incantations (mantras).

Vedas: Veda means "knowledge." But Hindus also use the term to describe the entire corpus of literature they deem sacred, including the Samhita, Brahmana, Aranyaka, and the Upanisads. Each of the four Samhita collections is known as a Veda, and other texts lay claim to the distinction of being a "fifth Veda." Christians call the Bible their "Veda."

Vedanta: "End of the Veda"; includes a huge corpus coming after the Upanisads, including Sutras and Sastras, as well as influential philosophical schools. One of these, Advaita (Non-Dualism or Monism), expounded by Sankara in the 8th century, stresses the essential oneness of all that exists, individual souls and ultimate being (Brahman).

Brahman: Two meanings, easily confused, are linked in one essence: (1) a person within the higher category of Hindu castes; and (2) "sacred power" or "divine breath" of Cosmic Totality. Thus, in Vedantic thought, it is the impersonal transcendent principle or Ultimate Reality underlying all existence, to which access can be sought through discipline (yoga). Some believe that this power is embodied in particular deities. Different traditions have different views on how humans beings relate to Brahman.

Mukti: Also called moksha, mukti is "freedom," "liberty," "liberation," "release," or "salvation." It refers to "absorption" into timeless Existence (Brahman) and freedom from all suffering and sorrow (as distinct from the Buddhist concept of nirvana or "extinction into nothingness").

Bhakti: "Devotion" or "adoring worship" of a deity or deities, especially in theistic traditions. Bhakti-yoga or "disciplined devotion or emotion" is one of three pathways to mukti, along with gnana-yoga ("disciplined-reason, or meditation") and karma-yoga ("disciplined action").

Guru: Any teacher, guide, mentor, or pandit who accepts and instructs another person, usually younger, as a student, apprentice, or disciple (sishiya or chela), often in some spiritual discipline.

ConversionHistoryIndiaInternational
Issue 87: Christianity in India: A Faith of Many Colors , 2005
Previous Article
Of Saris and Such
Jennifer Trafton
Next Article
Turning Point