What made African bishop Festo Kivengere rejoice in the face of monstrous evil?
Tim Stafford

In 1977, Festo Kivengere, an Anglican bishop from Uganda, published a short book entitled I Love Idi Amin. Amin was the African dictator routinely referred to as Africa's Hitler. Huge, hulking, alternating between charming buffoon and nightmarish thug, Amin murdered hundreds of thousands of his fellow citizens. In February 1977, he arrested and killed Anglican Archbishop Janani Luwum, simply because the Anglican bishops had dared to speak up against illegal executions.

Kivengere was one of the last people to see Luwum alive. He waited outside the building where Luwum was interrogated until guards forced him to leave at gunpoint. Expecting arrest, Kivengere escaped Uganda on foot. Within the year he had published his book.

I love Idi Amin? It was almost a reckless statement—as though, to put it in contemporary terms, someone standing in the smoke from the Twin Towers erected a sign saying, "I love Osama."

"The Holy Spirit showed me," Kivengere wrote, "that I was getting hard in my spirit, and that my hardness and bitterness toward those who were persecuting us could only bring spiritual loss … So I had to ask for forgiveness from the Lord, and for grace to love President Amin more."

Kivengere's testimony goes beyond extraordinary forgiveness. He was an evangelist, sometimes called "the African Billy Graham." His book details outbreaks of revival as, in the same year as Amin's terror, Ugandans celebrate the 100th anniversary of the first missionaries' bringing the gospel. Imprisoned church leaders sing and share their testimonies. People come to Christ in vast rallies. Groups of lay people go from one diocese to another to share the gospel. Catholic and Protestant clergy, long estranged, unite to celebrate together. And all the ...

AfricaChristian HistoryForgivenessInternationalUganda
Issue 94: Building the City of God in a Crumbling World, 2007
Previous Article
Love Amidst the Brokenness

Timothy George
Next Article
The Lord of Consciences 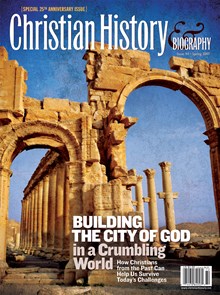 This article is from Issue 94 of the Christian History archive.