William McKinley saw America's unexpected opportunity in the Philippines as a sign from God—and set the U.S. on a new course of global influence.
Richard Pierard

On November 21, 1899, five clergymen representing the General Missionary Committee of the [Northern] Methodist Episcopal Church called on President William McKinley at the White House. After presenting a resolution of thanks to their fellow Methodist, they turned to leave. Suddenly, McKinley said earnestly, "Hold a minute longer! Not quite yet, gentlemen! Before you go I would like to say just a word about the Philippine business. I have been criticized a good deal about the Philippines, but don't deserve it. The truth is I didn't want the Philippines, and when they came to us, as a gift from the gods, I did not know what to do with them. … I sought counsel from all sides—Democrats as well as Republicans—but got little help. … I walked the floor of the White House night after night until midnight; and I am not ashamed to tell you, gentlemen, that I went down on my knees and prayed Almighty God for light and guidance more than one night."

Finally, he said, the answer came to him "that there was nothing left for us to do but to take them all, and to educate the Filipinos, and uplift and civilize and Christianize them, and by God's grace do the very best we could by them, as our fellow-men for whom Christ also died. And then I went to bed, and went to sleep, and slept soundly, and the next morning I sent for the chief engineer of the War Department (our map-maker), and I told him to put the Philippines on the map of the United States [pointing to a large map on the wall of his office], and there they are, and there they will stay while I am President!"

This is one of the most remarkable religious statements ever made by a sitting president, even in an age when people more openly displayed their personal ...

InternationalMissionsPhilippinesPresidentsUnited States
Issue 99: Faith & the American Presidency, 2008
Previous Article
War and the Will of God

Ronald C. White Jr.
Next Article
The Most Democratic Book in the World 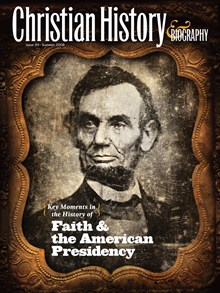