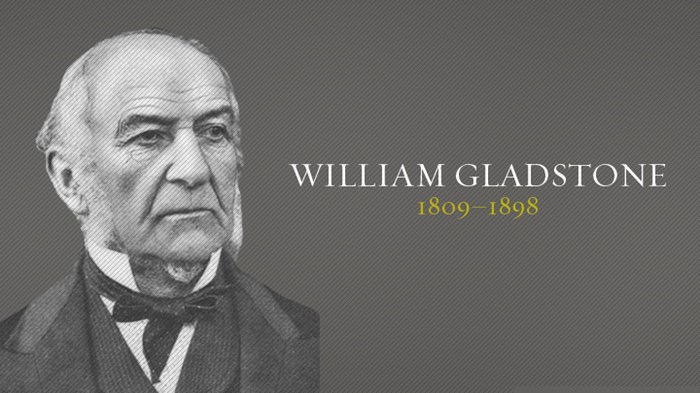 "My political or public life is the best part of my life: it is that part in which I am conscious of the greatest effort to do and avoid as the Lord Christ would have me do and avoid."

For William Gladstone, service in political life was a "most blessed calling." He once said to Queen Victoria, "My political or public life is the best part of my life: it is that part in which I am conscious of the greatest effort to do and avoid as the Lord Christ would have me do and avoid."

He was raised in an evangelical home, and as a young man, he dedicated his life to Christ. Before embarking on a political career, he seriously considered taking holy orders. But when he entered Parliament in 1832, he never looked back. His political career lasted over 60 years.

He served as president of the board of trade, secretary for the colonies, Chancellor of the Exchequer, and for four different terms, the prime minister. Among his many achievements, he disestablished the Church of Ireland to free Roman Catholics from having to pay taxes to the Anglican church, supported an Irish land act that protected the peasantry, and achieved important reforms—competitive admission to the civil service, vote by secret ballot, abolition of sales commissions in the army, educational expansion, and court reorganization.

In spite of such success, he was a controversial figure. He was disliked by Queen Victoria and had many political rivals, including the great Benjamin Disraeli. Over many years, Gladstone gradually abandoned the traditional Tory beliefs on the importance of rank and privilege—beliefs Disraeli ardently championed. As their differences widened, Disraeli's antipathy for Gladstone increased.

When Gladstone became Chancellor of the Exchequer, Disraeli (the previous chancellor) refused to give him the traditional robes of office. Gladstone repeatedly asked for them, and Disraeli repeatedly sent evasive responses. (The robes never were sent, and today they are displayed in Disraeli's home at Hughenden Manor.)

The ideals that informed Gladstone's public philosophy were rooted in Judeo-Christian morality. Among them, he believed:

Gladstone's interests and gifts ranged beyond politics. He was a superb linguist and classical scholar. He was also a prolific author, frequently contributing to reviews and magazines. Articles on a variety of topics, including poetry, constitutional politics, economics, and church history, flowed from his pen.

He loved the outdoors and believed in vigorous exercise. Moreover, though great demands were placed upon him, he often made time for personal philanthropy. In later years, he wrote several works in defense of the Christian faith. He once publicly debated the famous agnostic T. H. Huxley over the creation narrative in the Book of Genesis.

"The grand old man" retired from political life in early 1894. He traveled widely and continued to write on a variety of subjects. Following his death in 1898, he was buried in Westminster Abbey. Of all of the many tributes offered in his memory, perhaps the shortest and simplest was the most eloquent. He was, Lord Salisbury stated, "a great Christian man."

EnglandIntegrityInternationalPoliticsWilliam Gladstone
131 Christians Everyone Should Know