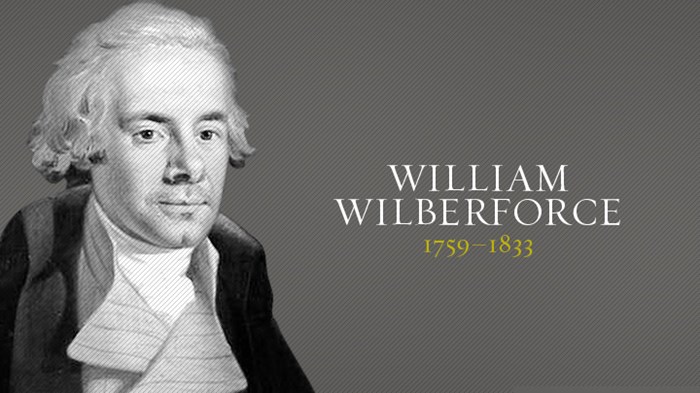 "So enormous, so dreadful, so irremediable did the [slave] trade's wickedness appear that my own mind was completely made up for abolition. Let the consequences be what they would: I from this time determined that I would never rest until I had effected its abolition."

In the late 1700s, when William Wilberforce was a teenager, English traders raided the African coast on the Gulf of Guinea, captured between 35,000 and 50,000 Africans a year, shipped them across the Atlantic, and sold them into slavery. It was a profitable business that many powerful people had become dependent upon. One publicist for the West Indies trade wrote, "The impossibility of doing without slaves in the West Indies will always prevent this traffic being dropped. The necessity, the absolute necessity, then, of carrying it on, must, since there is no other, be its excuse."

By the late 1700s, the economics of slavery were so entrenched that only a handful of people thought anything could be done about it. That handful included William Wilberforce.

Taking on a purpose

This would have surprised those who knew Wilberforce as a young man. He grew up surrounded by wealth. He was a native of Hull and educated at St. John's College at Cambridge. But he wasn't a serious student. He later reflected, "As much pains were taken to make me idle as were ever taken to make me studious." A neighbor at Cambridge added, "When he [Wilberforce] returned late in the evening to his rooms, he would summon me to join him…. He was so winning and amusing that I often sat up half the night with him, much to the detriment of my attendance at lectures the next day."

Yet Wilberforce had political ambitions and, with his connections, managed to win election to Parliament in 1780, where he formed a lasting friendship with William Pitt, the future prime minister. But he later admitted, "The first years in Parliament I did nothing—nothing to any purpose. My own distinction was my darling object."

But he began to reflect deeply on his life, which led to a period of intense sorrow. "I am sure that no human creature could suffer more than I did for some months," he later wrote. His unnatural gloom lifted on Easter 1786, "amidst the general chorus with which all nature seems on such a morning to be swelling the song of praise and thanksgiving." He had experienced a spiritual rebirth.

He abstained from alcohol and practiced rigorous self-examination as befit, he believed, a "serious" Christian. He abhorred the socializing that went along with politicking. He worried about "the temptations at the table," the endless dinner parties, which he thought were full of vain and useless conversation: "[They] disqualify me for every useful purpose in life, waste my time, impair my health, fill my mind with thoughts of resistance before and self-condemnation afterwards."

He began to see his life's purpose: "My walk is a public one," he wrote in his diary. "My business is in the world, and I must mix in the assemblies of men or quit the post which Providence seems to have assigned me."

In particular, two causes caught his attention. First, under the influence of Thomas Clarkson, he became absorbed with the issue of slavery. Later he wrote, "So enormous, so dreadful, so irremediable did the trade's wickedness appear that my own mind was completely made up for abolition. Let the consequences be what they would: I from this time determined that I would never rest until I had effected its abolition."

Wilberforce was initially optimistic, even naively so. He expressed "no doubt" about his chances of quick success. As early as 1789, he and Clarkson managed to have 12 resolutions against the slave trade introduced—only to be outmaneuvered on fine legal points. The pathway to abolition was blocked by vested interests, parliamentary filibustering, entrenched bigotry, international politics, slave unrest, personal sickness, and political fear. Other bills introduced by Wilberforce were defeated in 1791, 1792, 1793, 1797, 1798, 1799, 1804, and 1805.

When it became clear that Wilberforce was not going to let the issue die, pro-slavery forces targeted him. He was vilified; opponents spoke of "the damnable doctrine of Wilberforce and his hypocritical allies." The opposition became so fierce, one friend feared that one day he would read about Wilberforce's being "carbonated [broiled] by Indian planters, barbecued by African merchants, and eaten by Guinea captains."

Slavery was only one cause that excited Wilberforce's passions. His second great calling was for the "reformation of manners," that is, morals. In early 1787, he conceived of a society that would work, as a royal proclamation put it, "for the encouragement of piety and virtue; and for the preventing of vice, profaneness, and immorality." It eventually become known as the Society for the Suppression of Vice.

In fact, Wilberforce—dubbed "the prime minister of a cabinet of philanthropists"—was at one time active in support of 69 philanthropic causes. He gave away one-quarter of his annual income to the poor. He fought on behalf of chimney sweeps, single mothers, Sunday schools, orphans, and juvenile delinquents. He helped found parachurch groups like the Society for Bettering the Cause of the Poor, the Church Missionary Society, the British and Foreign Bible Society, and the Antislavery Society.

In 1797, he settled at Clapham, where he became a prominent member of the "Clapham Sect," a group of devout Christians of influence in government and business. That same year he wrote Practical View of the Prevailing Religious System of Professed Christians—a scathing critique of comfortable Christianity that became a bestseller.

All this in spite of the fact that poor health plagued him his entire life, sometimes keeping him bedridden for weeks. During one such time in his late twenties, he wrote, "[I] am still a close prisoner, wholly unequal even to such a little business as I am now engaged in: add to which my eyes are so bad that I can scarce see how to direct my pen."

He survived this and other bouts of debilitating illness with the help of opium, a new drug at the time, the affects of which were still unknown. Wilberforce soon became addicted, though opium's hallucinatory powers terrified him, and the depressions it caused virtually crippled him at times.

When healthy, however, he was a persistent and effective politician, partly due to his natural charm and partly to his eloquence. His antislavery efforts finally bore fruit in 1807: Parliament abolished the slave trade in the British Empire. He then worked to ensure the slave trade laws were enforced and, finally, that slavery in the British Empire was abolished. Wilberforce's health prevented him from leading the last charge, though he heard three days before he died that the final passage of the emancipation bill was ensured in committee.

Though some historians argue that Thomas Clarkson and others were just as important in the antislavery fight, Wilberforce in any account played a key role in, as historian G.M. Trevelyan put it, "one of the turning events in the history of the world."