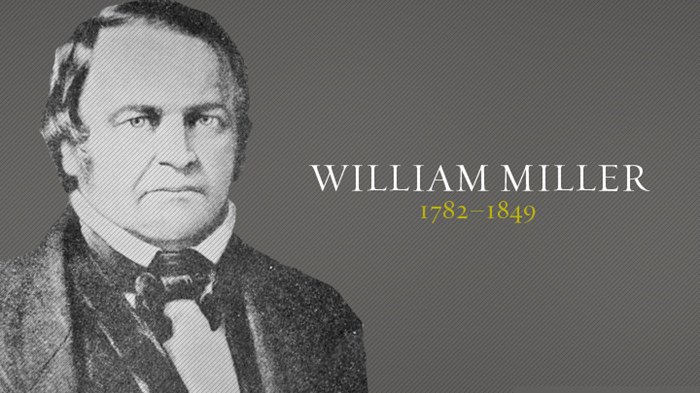 "We have passed what the world calls the last round of 1843 … Does your heart begin to quail? Or are you waiting for your blessed hope in the glorious appearing of Jesus Christ?"

In recent years, we have almost come to expect the well-publicized reports from Bible-belt Texas and avant-garde California of a self-proclaimed prophet announcing the end of the world. He attracts a large following or triggers a near panic—and ends up wrong. The most famous case on American soil, however, took place in the northeastern United States just before the Civil War.

The prophet of doom was no bug-eyed fanatic. He was a square-jawed, honest, church-going farmer named William Miller.

A former captain in the War of 1812, Miller converted from Deism in 1816. Excited, he began to "search the Scriptures" for the truth. After two years he was convinced he understood them—especially Daniel 8:14: "Unto 2,300 days; then shall the sanctuary be cleansed."

The cleansing of the sanctuary, Miller believed, could only mean the purging of the earth by fire—in short, the end of the world.

By interpreting these prophetic days as years and beginning from the date of the prophecy (placed by James Ussher at 457 B.C.), Miller concluded that the end of the 2,300 "days" would fall in 1843: "I was thus brought to the solemn conclusion that in about 25 years from that time all the affairs of our present state would be wound up."

At first Miller was reluctant to reveal his secret. He had grown up in Low Hampton, New York, near the Vermont border. He married in 1803 and moved to Poultney, Vermont, where he farmed and served as a simple sheriff and justice of the peace. But in 1828, he felt an inward "call" to tell the world of his discovery. "I tried to excuse myself," he later wrote, "I told the Lord that I was not used to speaking … that I was slow of speech and slow of tongue. But I could get no relief."

By 1831 he found the courage to share his discovery with neighbors and friends. When asked to discuss his views in a nearby church, he suddenly discovered that on this one subject he could be eloquent. Invitations multiplied, and Miller gained a bit of local notoriety. Though never ordained, his status was regularized in 1833 with a license to preach.

Then two events combined to give Miller a much larger audience. First, in 1838 he published his Evidence from Scripture and History of the Second Coming of Christ, About the Year 1843. Next he made an excursion to the large cities in New England for a series of lectures. At Exeter, New Hampshire, he met Joshua V. Himes, pastor of the Chardon Street Baptist Chapel in Boston. Himes sensed immediately the power in the message of the quiet, middle-aged farmer, and he joined Miller as his manager and publicity agent. Himes equipped Miller with a great chart displaying the millennial calculations in graphic form, purchased the biggest tent in the country for his meetings, and edited two journals—New York's Midnight Cry and Boston's Signs of the Times.

Miller the man was transformed overnight into the Millerite Movement. Himes and his associates recruited other evangelists and sent them on speaking tours; organized camp meetings; and published tracts, books, and pamphlets.

As the dreaded year approached, Miller's preaching drew larger crowds. In six months, he delivered more than 300 lectures with the constant theme: Are you ready to meet your Savior?

Mobs of angry citizens tried to break up some of the meetings. Miller himself was pelted with eggs and decaying vegetables. But the crowds grew larger and the number of converts mounted. More than 50,000 believed Miller, and as many as a million others were curious and expectant.

With excitement rising, people began to demand a definite day for the Lord's appearance. Miller was reluctant to be more specific, but in January 1843, he announced that this Hebrew year—March 21, 1843, to March 21, 1844—must see the end of time. But, he pleaded, if the estimate should prove slightly inaccurate, his followers should have faith that their deliverance would come soon, in God's appointed time.

As the year progressed, tension mounted, especially when a comet suddenly appeared in the heavens. There were huge meetings in New York and Philadelphia, but dates for future gatherings were announced with the proviso "if time continues."

Miller was ill through most of 1843, and his lieutenants, many far less cautious than the old soldier, carried on the fight. Their radicalism added to the weary prophet's pain.

The opening days of 1844 found Miller, then 62, at home resting from a strenuous speaking tour—85 lectures in eight weeks. But he believed firmly that the end was near. Aware of the scoffers, he thought it time to write "to second advent believers" a few words of encouragement:

We have passed what the world calls the last round of 1843 … Does your heart begin to quail? Or are you waiting for your blessed hope in the glorious appearing of Jesus Christ? Let me say to you in the language of the blessed Book of God, 'although it tarry, wait for it; it will surely come, it will not tarry.' Never has my faith been stronger than at this very moment.

Then March 21, 1844, came—and nothing happened. After a month, Miller confessed his error and acknowledged his disappointment. But one of his followers pointed to other verses (Hab. 2:3, Lev. 25:9) and explained there must be a "tarrying time" of seven months and ten days.

So October 22, 1844, became the new day of Christ's return, and people were rallied again with the slogan: "The Tenth Day of the Seventh Month." Miller was finally converted to the new date. "I see a glory in the seventh month," he said. "Thank the Lord, O my soul! … I am almost home." The excitement revived, and the number living on the edge of eternity seemed to be greater than ever.

When the second date came and went, just as the first one, most of Miller's followers were completely disillusioned. Many became bitter toward Miller, who lived until 1849, and died a discredited, almost forgotten man.

In spite of the "great disappointment," as it came to be called, some adventists remained steadfast. One small group in New England led by James White and his wife, Ellen Gould White, became the Seventh-Day Adventist Church we know today. Other adventists met in Albany in 1845 to form a conference that later splintered into three groups. One of these is today called Second Advent Christians. They believe Miller was wrong on the time, but this was a minor matter. He was right on the essential: Christ is coming soon.

AdventistsEvangelismRevivalWilliam Miller
131 Christians Everyone Should Know