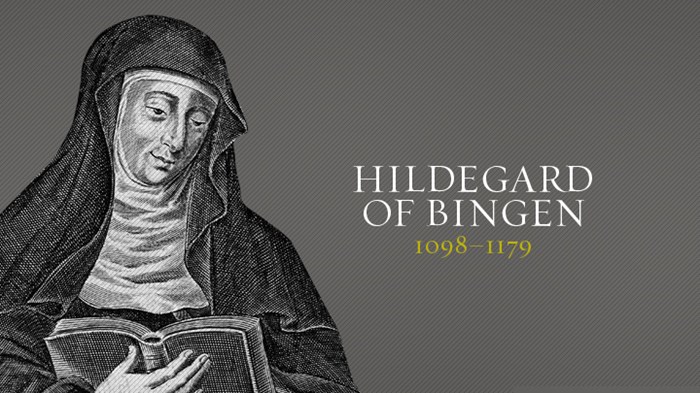 "A fiery light, flashing intensely, came from the open vault of heaven and poured through my whole brain. Like a flame that is hot without burning it kindled all my heart and all my breast … Suddenly I could understand."

In one of the earliest manuscripts of Hildegard's works, an illustration shows the abbess seated, tablet in hand; above her head, fiery light streams down, penetrating her mind, bringing visions that illumined her life from childhood.

She believed that not only her visions but also her interpretation of them were from God, and so she announced them with vigor and authority. Though commonly called a mystic, she did not think of these as private illuminations but as prophetic words of God for the church.

She was born to a noble family in Mainz, Germany, in the year that Urban II announced the First Crusade. Medieval Europe had undergone spiritual renewal the previous century, and spiritual enthusiasm hung in the air. Hildegard, the youngest of 10 children, was 8 years old when she was given by her parents as a tithe to God. They entrusted her to Jutta, an anchoress, to be her maid and apprentice. Even at that young age, Hildegard experienced visions of light, but she could not understand what they meant.

When other women joined Jutta and Hildegard, they formed a Benedictine convent, and when Jutta died in 1136, Hildegard became abbess and later moved the community near Bingen, by the Rhine river. For her last 43 years, she cared for these women.

1077 Emperor submits to pope over investiture

Hildegard received a remarkable vision at age 42: "A fiery light, flashing intensely, came from the open vault of heaven and poured through my whole brain. Like a flame that is hot without burning, it kindled all my heart and all my breast. … Suddenly I could understand."

Hildegard's ministry exploded after that. In addition to recording her visions and their interpretations in books, Hildegard wrote works on medicine and natural science. She composed music and wrote plays.

The most controversial part of her ministry was her several preaching tours around the Rhineland, during which she rebuked church's leaders for spiritual abuses.

Scivias, her best-known work, contains 26 visions with their interpretations. Its name is an abbreviation for Scito vias Domini, "Know the ways of the Lord." In it she spoke with a prophet's voice, using the first person, speaking as it were for God.

"I spoke and wrote these things not by the invention of my heart or that of any other person," she said, "but as by the secret mysteries of God; I heard and received them in the heavenly places. And again I heard a voice from heaven saying to me, 'Cry out therefore, and write thus!'"

In spite of her harsh denunciations, Hildegard believed that her "new song must float like a feather on the breath of God." Still, though both Bernard of Clairvaux and Pope Eugenius III recognized her spiritual authenticity, she encountered fierce opposition from other church leaders.

During her last year, her superiors, unhappy with her opposition to local church policies, placed her community under interdict for six months. During that time she and her daughters were denied both the Eucharist and music.

Regardless, Hildegard pursued her ministry until she died: "By a just measure I mark out the ways of good and bad people, and weigh their wills according to what my eye sees of their desires."

Hildegard of BingenMonasticismTheologiansWomen in Leadership
131 Christians Everyone Should Know
Related Christian History Issue:

Issue 30
Women in the Medieval Church
1991
Hildegard of Bingen