Preacher who gave his utmost 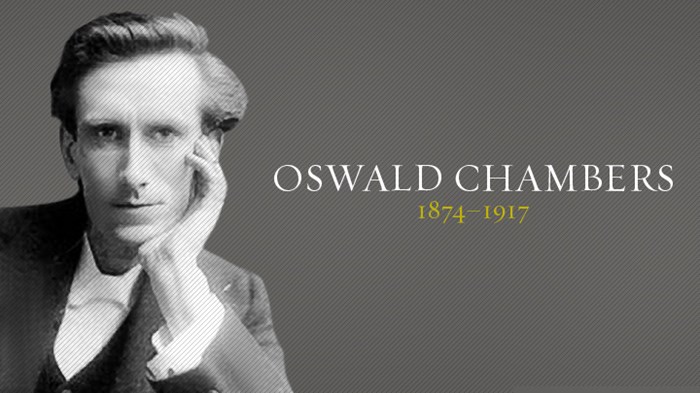 "The great word of Jesus to his disciples is abandon. When God has brought us into the relationship of disciples, we have to venture on his word; trust entirely to him and watch that when he brings us to the venture, we take it."

"I feel I shall be buried for a time, hidden away in obscurity; then suddenly I shall flame out, do my work, and be gone." So wrote 22-year-old Oswald Chambers as he began his long preparation in a remote Scottish town before being thrust into the world as a preacher. He was partially right; after 15 years of public ministry, Chambers died suddenly at age 43. But he remains far from gone—his devotional My Utmost for His Highest (sermons published posthumously, like nearly 50 other devotionals bearing his name) remains one of the most popular devotional guides ever printed.

Portrait of an artist

Born as a Baptist preacher's son in Aberdeen, Scotland, Chambers converted under the preaching of Charles Spurgeon. In his twenties, he sought to portray the message of God's redemption in art, studying technique in London and Edinburgh.

Gradually Chambers began to believe God wanted him not to pursue the arts for God's sake, but God for the sake of his will alone. As he later wrote, "It takes me a long while to realize that God has no respect for anything I bring him. All he wants from me is unconditional surrender."

His decision led him to Dunoon College, a small, interdenominational theological school. It wasn't long before Chambers himself began to believe, like family members and his artist colleagues, he was foolish—or insane. During those "four years of hell on earth," Chambers continued his work but inside felt overcome by an acute vision of his own depravity and the powerlessness of his faith.

The experience brought Chambers to the brink of spiritual desperation. He threw himself completely on Jesus' promise that God would give his Spirit to those who ask. The struggle was instantly over. Chambers later described the restult: "Glory be to God, the last aching abyss of the human heart is filled to overflowing with the love of God."

Soon after his "spiritual emancipation," Chambers became much in demand as an itinerant speaker and teacher through the revivalistic League of Prayer.

Because Chambers believed that spiritual mediocrity was often the result of mental lethargy, he opened the Bible Training College with the League in 1911. When World War I interrupted academic life, Chambers enlisted as a chaplain to the armed forces. In October 1915, he proceeded to Zeitoun, Egypt, where he and his wife evangelized soldiers.

Whether speaking to soldiers or students, Chambers called his listeners to live aggressively for God. God's will, he said, can be found in any circumstance of life, so long as individuals are willing to have a personal relationship with Christ and completely abandon themselves to him. "The great word of Jesus to his disciples is abandon," he wrote. "When God has brought us into the relationship of disciples, we have to venture on his word; trust entirely to him and watch that when he brings us to the venture, we take it."

A ruptured appendix and consequent complications cut Chambers's life short in late 1917. It seemed an unbelievably tragic end to a life of promise. But it wasn't the end. His wife, whose ambition to become secretary to England's prime minister prompted her to acquire an astonishing skill at shorthand, transcribed and published Chambers's lectures. She sent them in pamphlet form to many soldiers to whom Chambers had ministered, as well as to past students. Soon she gathered the material into book form and, in 1927, she first published My Utmost for His Highest.