Champion of the serious, devout, and holy life 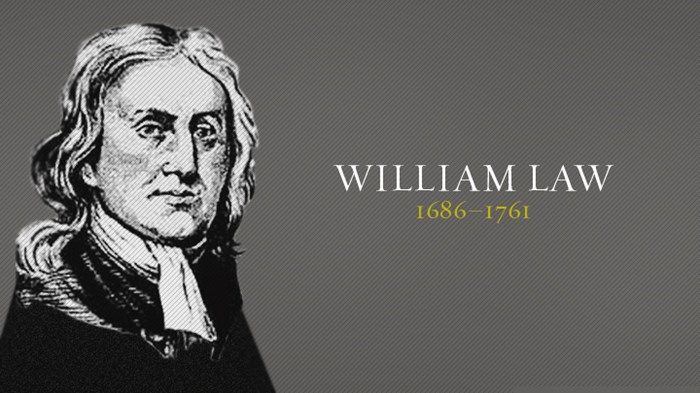 From a professional perspective, William Law's life seemed to be over when he was 28 years old. Son of a prosperous businessman, Law had received an excellent education at Cambridge and had a solid future as a scholar or clergyman ahead of him. Then Queen Anne died without an heir. On the ascension of the German George I to the English throne, Law refused to swear an oath of allegiance. As a "nonjuror," Law was forced to give up his fellowship and was denied further advancement in the Church of England or in any academic institution.

The outer structure of his life to his death 47 years later is easily told. For many years, he served as tutor to Edward Gibbons, father of the renowned historian. When Edward left home, Law retired to his family home where he devoted his life to writing. Celibate, rigorous, and solitary, Law honed his writing skills.

As a young adult preparing for university studies, Law had written a list of 18 rules to guide his living. They included the commitment to the will of God, the primacy of Scripture, the value of time, a distrust of the world, temperance in all things, humility and charity, prayer, and constant self-examination.

Clearly Law was not a product of his age. Catholic, Anglican, and Puritan factions warred within the English church. Morality and piety were correct in form but devoid of spiritual passion in many quarters. Many found "philosophical religion"—deism or rationalism—more to their liking. Law would have none of it. Regarding "philosophical religion," for example, he said, "There can be no such thing. Religion is the most plain, simple thing in the world. It is only, 'We love him, because he first loved us.' So far as you add philosophy to religion, just so far you spoil it."

Law's writings aimed at uncovering shallow devotion and stirring up readers to renewed moral vigor and holiness. Some writings were responses to published works; others were more broadly addressed, such as The Absolute Unlawfulness of Stage Entertainment. But most of his works were in the area of Christian spirituality, which he refused to relegate to a comfortable corner of life.

William Law's most widely known book, A Serious Call to a Devout and Holy Life, pulls together many of his thoughts in a lucid work addressed to the "average" Christian. It challenged Christians to wake up from their spiritual stupor and apply all their energy to the holy life: "He therefore is a devout man who lives no longer to his own will, or the way and spirit of the world, but to the sole will of God, who considers God in everything, who serves God in everything, who makes all the parts of his common life parts of piety by doing everything in the name of God."

Law used fictional characters to make his points. For example, "Julius," though he is "fearful of missing his prayers," is a "companion of the silliest people in their most silly pleasures," and for "Claudius … every hour of the day is with him an hour of business, and though he eats and drinks very heartily, yet every meal seems to be in a hurry, and he would say grace if he had time." These portraits teach that every aspect of the Christian's life—relationships, business endeavors, family matters, leisure, dress—should be shaped by unwavering devotion.

"As a good Christian should consider every place as holy," he wrote, "so he should look upon every part of his life as a matter of holiness. … Everything that lives must all with one spirit live wholly to the praise and glory of this one God and Father of them all. This is the common business of all persons in this world."

In his later years, Law, influenced by German mysticism, produced The Spirit of Prayer and The Spirit of Love, which emphasized the indwelling of Christ in the soul. (This, however, alienated some, like John Wesley, who had up to this time eagerly followed his work.) The day before he died, he said, "Oh what hast thou done? Thou has awakened such a spark of divine love that quite devours me. Who would have thought that all my life should end in my dying a martyr to love!"