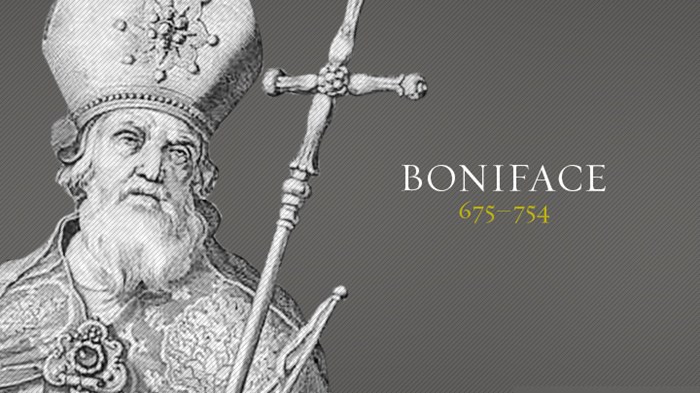 "You seem to glow with the salvation-bringing fire which our Lord came to send upon the earth."
— Gregory II to Boniface

His first job as a missionary was a failure. Wynfrith (or Winfrid) had wanted to be a traveling evangelist ever since missionary monks had visited his family's home when he was five years old. He'd given up his noble parents' secular dreams for him back in Wessex, England. And he'd given up a successful life as a Benedictine monk—having written the first Latin grammar produced in England, several poems, and a treatise on metrics.

Now in his early forties, Wynfrith wanted to be a missionary, particularly one to Friesland (in the northern Netherlands). But the Frisians were in revolt, and Wynfrith had to come home without converts.

While he'd been away, his abbot had died—and Wynfrith had been elected to replace him. It was a high honor, but Wynfrith still wanted to be a missionary. He sailed away from England for the last time, this time bound to meet the pope in Rome.

Pope Gregory II confirmed Wynfrith's call to missions, remarking, "You seem to glow with the salvation-bringing fire which our Lord came to send upon the earth." After receiving assurances that the English monk would use the Roman, not Celtic, formula for baptism, he commissioned Wynfrith to evangelize both those "led astray … and now serve idols under the guise of the Christian religion" and those "not yet cleansed by the waters of holy Baptism." The pope also changed Wynfrith's name to Boniface—"good works"—named after a Roman Christian martyred in the Arian controversy.

He returned to Friesland and Germany, evangelizing and suppressing heresy. While establishing churches and Benedictine monasteries, he destroyed idols, baptized heathens, and opposed "ambitious and free-living clerics." His zeal against heresy often led to ruthless, severe action. He demanded that two heretical missionaries not only be excommunicated, but imprisoned in solitary confinement. Even among sympathetic historians today, he has a reputation as "difficult, prickly, and tactless."

He was equally zealous in his mission against paganism. At Geismar, he found a huge sacred oak tree, a shrine to Thor. He immediately took an axe to it. After only a few blows, the tree toppled to the ground, breaking into four pieces and revealing itself to be rotted away from within.

"A great throng of pagans who were there cursed him bitterly among themselves because he was the enemy of their gods," wrote Boniface's biographer, Willibald. "When the pagans who had cursed saw this, they [stopped] cursing and, believing, blessed God." Boniface used the oak to build a chapel, which became the center of his new monastery.

As he continued to clash with pagans, heretics, and even fellow orthodox Christians (like the bishop of Mainz, who reportedly was trying to claim the regions evangelized by Boniface as his own), he became convinced that ecclesiastical reform was an integral part of evangelization. No church councils had been held in the Frankish realm for decades before his arrival. Boniface convened five between 742 and 747. At Boniface's prodding, the councils adopted strict regulations for the clergy and condemned local heretics. Eventually, Boniface himself was appointed archbishop of Mainz, replacing his rival.

After a few years of administration, Boniface again felt Friesland calling him, a land "he had once deserted in body but never, indeed, in his heart," according to Willibald. In his late seventies, he resigned his post to head north once again. Once again, he and his followers roamed the countryside destroying shrines, building churches, and baptizing thousands.

One group of these new converts was due to arrive at Dorkum on the River Borne. But while Boniface and his 52 companions awaited the neophytes, a gang of pagan predators arrived on the shore seeking loot. Though he had earlier traveled under the armed protection of the Frankish ruler, he was now far beyond its reach. Boniface, at his first synod, had ensured that clergy would not carry arms, so all he had to defend himself was the book in his arms, which he used as a shield.

The new Christians, who had fled upon seeing the raiders, returned to find Boniface and his companions slaughtered. Next to their bishop lay a copy of Ambrose's writings on The Advantage of Death, with two deep slashes in it. The book is still on display in Fulda, Germany.

Actually, Boniface spent a small percentage of his life as a missionary. His historical significance is found more in his strong advocacy of Roman order in the church, his reform of the Frankish churches, his uniting churches in southern and central Germany, and his revitalizing nominal Christians in northern Europe. But he thought of himself mainly as a missionary, as did countless others. From the eighth century to the eleventh, he became one of missionaries' top role models.

BonifaceGermanyInternationalMissions
131 Christians Everyone Should Know