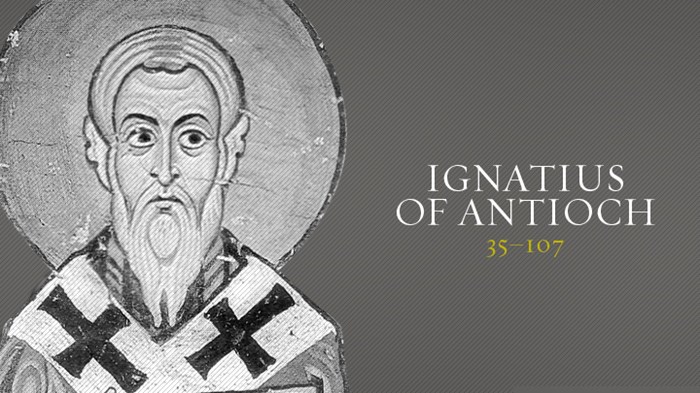 "Now I begin to be a disciple. … Let fire and cross, flocks of beasts, broken bones, dismemberment … come upon me, so long as I attain to Jesus Christ."

Ignatius was going to die. He knew it. He wanted it. The only possible problem, as he saw it, was meddling Christians.

"I fear your kindness, which may harm me," he wrote to Roman Christians hoping to free him. "You may be able to achieve what you plan. But if you pay no heed to my request, it will be very difficult for me to attain unto God." And that was truly Ignatius's goal: to imitate "our God Jesus Christ" in death. If Christians really wanted to do something, they should pray that he would remain faithful. "If you remain silent about me, I shall become a word of God. But if you allow yourselves to be swayed by the love in which you hold my flesh, I shall again be no more than a human voice."

That Ignatius truly wanted to die was about as much as we know about his martyrdom. It's not even known for certain that he was killed, though that's likely.

As the second (or third) bishop of Antioch, one of the most important churches of the day, he was certainly one of the most prominent Christians of the time immediately succeeding the apostles. But Antioch was also home to some religious debates, and while Ignatius denounced division as "the beginning of evil," the bishop engaged in debate with tenacity.

To the Magnesian church (near Ephesus) he wrote scathingly of the Ebionites, who demanded the keeping of Jewish regulations. "It is outrageous to utter the name of Jesus Christ and live in Judaism." Similar attacks were launched against the Docetists, who believed Christ only appeared to be human. Anyone believing such nonsense that Christ only seemed to suffer could not truly be called a martyr, he asserted.

He was probably arrested on the charge of "atheism"—denial of the Roman gods—and was taken from Antioch to Rome by an escort of ten soldiers. At nearly every stop, he met leaders of local churches, and during the trip he penned, with the help of a secretary, seven letters.

Though most famous for being one of the church's earliest martyrs, his letters also served to record the rapid development of church hierarchy. "Follow, all of you, the bishop, as Jesus Christ followed the Father," he wrote to Polycarp's church at Smyrna (now Izmir, Turkey). "Wherever the bishop appears, there let the people be, even as wheresoever Christ Jesus is, there is the catholic church. It is not lawful apart from the bishop either to baptize or to hold a love-feast [church meal]," he continued in his letter to Smyrna. The instruction is also remarkable because it is the first recorded use of the phrase "catholic [meaning, universal] church." (He was also the first outside the New Testament to speak of Jesus' virgin birth.)

The details of Ignatius's death are lost to history, but not his desire to have his life count for something: "Now I begin to be a disciple … Let fire and cross, flocks of beasts, broken bones, dismemberment … come upon me, so long as I attain to Jesus Christ."

Issue 27
Persecution in the Early Church
1990