Apostles to the Slavs 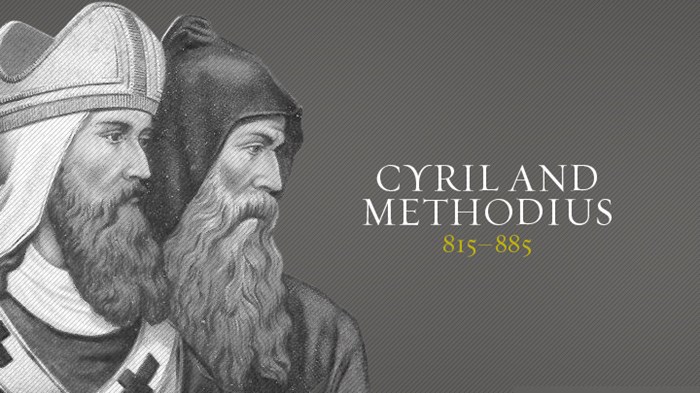 "One cannot estimate the significance, for the future of Orthodoxy, of the Slavonic translations [of Cyril and Methodius]."—Orthodox apologist Timothy Ware

When the Moravian Prince Ratislav requested that the Byzantine Emperor Michael III send missionaries to Moravia "to explain to us the Christian truths in our own language," it was the brothers Cyril and Methodius who were sent. They had already developed a reputation as keen thinkers and administrators. By the end of their lives, they were well on the way to becoming the most celebrated missionary team in Eastern Orthodox history.

The politics of liturgy

They were born "Constantine" and "Michael" to a high ranking officer in the Byzantine Army, and both studied at the Imperial School of Constantinople. They each carved out a successful career: Constantine (later Cyril) as professor of philosophy at the Imperial school; Michael, first as governor in Macedonia and then abbot of a monastery in Asia Minor (where he took the name Methodius).

In 863, when they started their work among the Slavs, they began using Slavonic in the liturgy. They translated the Bible into the language later known as Old Church Slavonic (or Old Bulgarian) and invented a Slavic alphabet based on Greek characters, which in its final Cyrillic form is still in use as the alphabet for a number of Slavic languages.

International politics soon swirled around their little mission. The German archbishop of Salzburg claimed that Cyril and Methodius had invaded his ecclesiastical territory. Jealous for the church in Rome, the archbishop insisted that Latin, not Slavonic, be used in the liturgy.

So in 868, the brothers found themselves in Rome explaining themselves to Pope Adrian II, who took their side and formally authorized the use of the Slavonic liturgy. Though Cyril died in Rome, Methodius was sent back to the Slavs as Adrian's legate and as archbishop of Sirmium, a province that included all of Moravia.

When power in Moravia fell into new hands, Methodius was abandoned by the government; he was accused of usurping the Catholic archbishops' authority and of the "scandalous use of the Slavonic language" in the liturgy. He was brutally treated and jailed, and only freed by the intervention of Pope John VIII.

Unfortunately, after Methodius' death, Pope Stephen V reversed John VIII's ruling and forbade the use of the Slavonic liturgy. Wiching, Methodius's successor, drove the disciples of Cyril and Methodius into exile.

The exile only facilitated the spread of their work. "One cannot estimate the significance, for the future of Orthodoxy, of the Slavonic translations," said Orthodox apologist Timothy Ware. The Slavonic liturgy and Bible made their way all over Eastern Europe and gave birth to the Bulgarian and Serbian Orthodox churches (which still use the Slavonic liturgy). Russia, which converted to Orthodoxy about a century after Methodius died, continues to use his Cyrillic alphabet to this day.