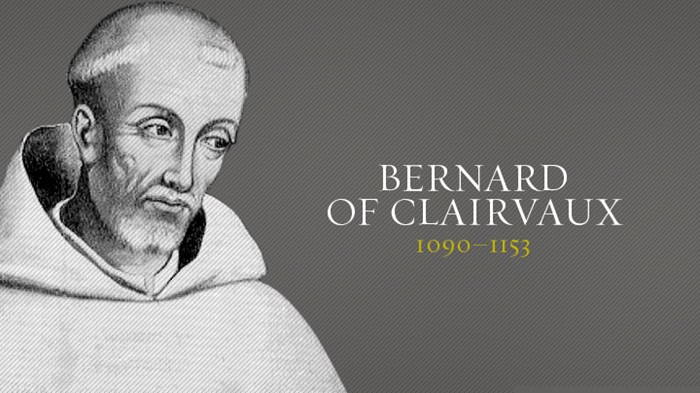 "You wish me to tell you why and how God should be loved. My answer is that God himself is the reason he is to be loved."

It's hard to know how to characterize Bernard of Clairvaux. On the one hand, he is called the "honey-tongued doctor" for his eloquent writings on the love of God. On the other hand, he rallied soldiers to kill Muslims. He wrote eloquently on humility; then again, he loved being close to the seat of power and was an adviser to five popes.

What is clear is this: 400 years after his death, he was still widely quoted by Catholics and Protestants, both of whom claimed his support. John Calvin considered him the major witness to truth between Gregory the Great and the 1500s. And today his writings still guide spiritual lives not only of the order he made famous, the Cistercians, but by men and women in all walks of life.

Bernard was born on the outskirts of Dijon in Burgundy to a family of lower nobility. Both his parents were models of virtue, but it was his mother who exerted the most influence on him (some speculate only second to what Monica had done for Augustine of Hippo). Her death, in 1107, marked for Bernard the beginning of his "long path to complete conversion."

Bernard sought the counsel of the abbot of Citeaux, Stephen Harding, and decided to enter his struggling, small, new community called the Cistercians. The order had been established in 1098 to restore Benedictine monasticism to a more primitive and austere state. Bernard was so taken with the order, he persuaded not only his brothers but some 25 others to join him at Citeaux in 1112.

Within three years of joining the order, he was appointed abbot of the third Cistercian monastery, at Clairvaux. There Bernard showed little patience with monks who wanted him to relax his standards. Mocking other monasteries' eating habits, he wrote, "The cooks prepare everything with such skill and cunning that the four or five dishes already consumed are no hindrance to what is to follow, and the appetite is not checked by satiety."

At the same time, he showed his growing spiritual wisdom. Regarding the danger of spiritual pride, he said, "There are people who go clad in tunics and have nothing to do with furs, who nevertheless are lacking in humility. Surely humility in furs is better than pride in tunics."

Despite the objection of some monks, the monastery under his leadership prospered. By 1118 Clairvaux was able to found its first daughter house—the first of some 70 Cistercian monasteries Bernard founded (which in turn founded another 100 monasteries in Bernard's lifetime).

As the order grew, so did Bernard's influence and responsibilities. Though he longed to return to a life of solitude (he had been a hermit for a time), he was thrust into the world for many of his remaining years.

Bernard had warm relationships with other reforming orders of his day, like the Carthusians and the Premonstratensians. He also wrote the Rule for the new order known as the Knights Templar, an order of men who took monastic vows and swore to defend the Holy Land militarily.

When influential and controversial Paris theologian, Peter Abelard, wrote, "It is by doubting that we come to inquire and by inquiring that we reach truth," and suggested that Christ died not to pay a penalty but merely to demonstrate God's love, Bernard was scandalized. In 1139, he wrote a lengthy letter to the pope refuting Abelard. He called the Parisian a "son of perdition" who "disdains and scoffs" the death of Christ: "I was made a sinner by deriving my being from Adam; I am made just by being washed in the blood of Christ and not by Christ's 'words and example.'"

Because of Bernard's letter and political influence (Pope Innocent III owed his position, in part, to Bernard's public support), Abelard's teaching was condemned, and he was forced to retire to a monastery.

Bernard's informal political influence was further enhanced with the election of Pope Eugenius III, one of Bernard's former pupils. Bernard had a high view of the papacy, and he called the pope "the unique vicar of Christ who presides over not a single people but over all." At the same time, he warned Eugenius, "You have been entrusted with stewardship over the world, not given possession of it. … There is no poison more dangerous for you, no sword more deadly, than the passion to rule." All in all, he wielded such influence with Eugenius III that Eugenius once complained to Bernard, "They say that it is you who are pope and not I."

When Eugenius called for the Second Crusade, he enlisted Bernard as the crusade's chief promoter. Bernard traveled over Europe calling upon men to enlist in "the cause of Christ." In one sermon he pleaded, "I ask you and advise you not to want to put your own business before the business of Christ."

Because of bickering and ineffective leadership, though, the crusade was a disaster, ending in an embarrassing retreat, and Bernard's reputation suffered the last four years of his life. Still, just a little over 20 years after his death, he was esteemed enough to be canonized.

What Bernard is remembered for today, more than his reforming zeal and crusade preaching, is his mystical writings. His best known work is On Loving God, in which he states his purpose at the beginning: "You wish me to tell you why and how God should be loved. My answer is that God himself is the reason he is to be loved."

His other great literary legacy is Sermons on the Song of Songs, 86 sermons on the spiritual life that, in fact, only tangentially touch on the biblical text. One passage in particular speaks aptly to Bernard's lifelong passion to know God (and, likely, the temptations that troubled him):

More on Bernard of Clairvaux

View All
Bernard of Clairvaux