Mystical founder of the Franciscans 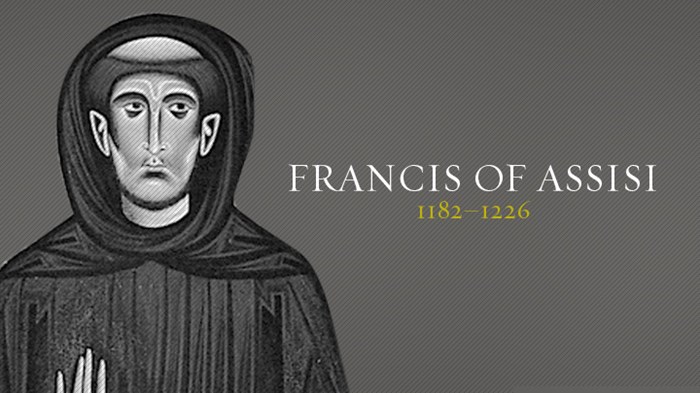 "Praised be You, my Lord, with all your creatures, especially Sir Brother Sun, who is the day and through whom You give us light."

It is difficult to think clearly about Francis of Assisi. The first thing that comes to mind is the gentle saint who preached to birds, tamed wolves, and padded about in flower-filled fields basking in the love of God. But it's also difficult to imagine how such a benign figure could turn thirteenth-century Europe upside down.

In fact, Francis was a complex figure, a man who contemporaries claimed lived out the Sermon on the Mount better than anyone else, except of course, the man who first preached it. If that's even close to the truth, it's a bit easier to see why he left such an impression on his age and every age since.

From hermit to itinerant

He was born in Assisi, Italy, as Giovanni Francesco Bernardone, son of a wealthy merchant. As a young man, Francis led a worldly, carefree life. An early biographer said, "He squandered his time terribly. Indeed, he outshone all his friends in trivialities." In 1202 he marched off to battle against the city of Perugia, full of a young man's dreams of military glory. But he was taken prisoner during the battle, and a year passed before his father could arrange ransom. That was followed by a year's convalescence in Assisi, a year in which Francis, now in his early twenties, was slowly transformed.During his illness, he experienced dreams and visions. One day as he prayed in a dilapidated church in San Damiano, at the edge of Assisi, he heard Christ say three times from the crucifix: "Francis, go repair my house, which, as you can see, is falling completely to ruin." Francis understood that he was to repair the church he prayed in (though his followers later would see this as his call to reform the church), so he proceeded to sell off family goods to raise money for repairs.

When his father caught wind of this, he was furious. He dragged Francis before the local bishop to force his son into changing his unseemly behavior and to pay him back. In the course of the interview, Francis took off his clothes and laid them neatly in a pile before his father. "Up to today I called you 'father,'" he said to him, "but now I can say in all honesty, 'Our Father who art in heaven.'" He walked out of the cathedral to become a hermit—to "be alone in solitude and silence," a biographer noted, "to hear the secrets which God could reveal to him."

Other inspirations followed. One day in church he heard from the Gospel of Matthew, "Take no gold or silver or copper in your wallet, no bag for your journey, nor two tunics or sandals or a staff." He took it literally and began an itinerant life: he intended to live in utter simplicity and to preach a gospel that usually entailed strong injunctions to repent. "He denounced evil whenever he found it," wrote one early biographer, "and made no effort to palliate it; from him a life of sin met with outspoken rebuke, not support."

Francis was more rigorous than popular imagination allows. In winter, he sometimes hurled himself in a ditch full of ice and stayed there until every vestige of sinful temptation departed. To avoid lust, he fixed his gaze on the sky or ground whenever he spoke with a woman.

By 1209 he had gathered a small band of "brothers" (12 men who wished to share in his life and ministry). He wrote a Rule and set off to Rome to gain the church's approval for his work. This became the First Order of Franciscans, and Francis was elected superior.

Women also were fascinated by Francis's message, and when Francis received a rich young women of Assisi named Clare, the Second Order of Franciscans was founded, also known as Poor Clares. (The Third Order of Franciscans, which Francis founded in 1221, is for those who lead their secular lives while trying to live by a modified Franciscan rule.)

Francis wandered all over Italy and at one point crossed the Mediterranean, visited a Crusader expedition in Egypt, crossed enemy lines, and attempted to convert the Muslim sultan. The sultan was unconvinced by the message but so impressed by the messenger that he afforded him safe passage back.

It was an era, like many, in which corruption infected ecclesiastical circles and indifference permeated the laity. But as one contemporary noted, as a result of the preaching of the Franciscan brothers and sisters, "persons of both sexes, rich and worldly, have renounced possessions and, for the love of Christ, turned their backs on the world." In short, Francis had begun a religious revival that spread over Europe.

With the order's growth came complications. The Rule that had served a small band was inadequate for the large organization the Franciscans were becoming. Francis himself sensed his own inadequacy to continue leading a large organization, so after penning a new Rule and his Testament (in a sense, last wishes), urging his brothers to retain the primitive standards used from the beginning, he resigned as head of the order.

In his last years, Francis popularized the living creche to highlight the poverty into which Christ was born. In 1224, on a mountaintop retreat, Francis had a mystical encounter that left him with bleeding wounds in his feet, hands, and side—the first recorded instance of stigmata.

As he entered his mid-forties, illness racked his body, finally taking his eyesight completely.

In his last years, he composed his famous Canticle of Brother Sun. From this poem Francis gets his deserved reputation as one who reveled in God's creation:

"Praised be You, my Lord, with all your creatures, especially Sir Brother Sun,

Who is the day and through whom You give us light …"

In the poem Francis also praised "Brother Wind" and "Brother Fire" and "Sister Mother Earth." What many forget is that near the end of the poem, he wrote this:

"Praised be You, my Lord, through our Sister Bodily Death, from whom no man can escape.

Woe to those who die in mortal sin.

Blessed are those whom death will find in Your most holy will. …"

Such was the death of Francis, whose life was so clearly committed to God's "holy will" that he was canonized within two years—exceedingly fast by Roman Catholic standards.

After Francis's death, the Franciscans continued to grow and—ironic for an order once told by their founder "to appropriate nothing for themselves, neither a house, nor a place, nor anything else"—soon became quite rich. A stunning basilica was built in Assisi, and Francis's relics were moved there in 1230.

More on Francis of Assisi