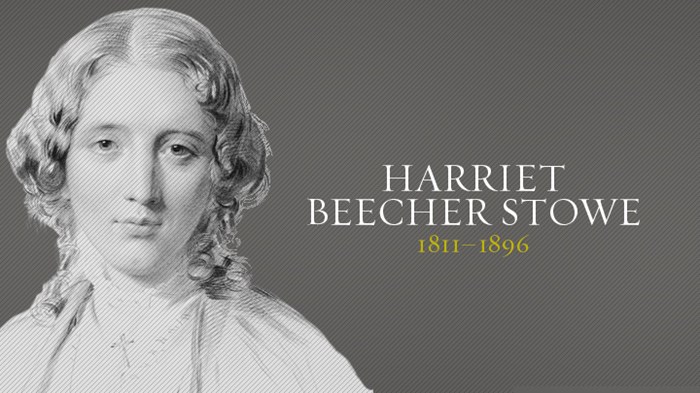 "[Uncle Tom's Cabin is] perhaps the most influential novel ever published, a verbal earthquake, an ink-and-paper tidal wave."
—one of Harriet Beecher Stowe's critics

When President Lincoln met Harriet Beecher Stowe in 1863, he is reported to have said, "So you're the little woman who wrote the book that made this great war!"

Uncle Tom's Cabin may not have caused the Civil War, but it shook both North and South. It declared the profound value of a human soul and made emancipation inevitable. Susan Bradford wrote, after her state of Florida seceded, "If Mrs. Harriet Beecher Stowe had died before she wrote Uncle Tom's Cabin, this would never have happened … Isn't it strange how much harm a pack of lies can do?"

Harriet was the seventh of 12 children of Lyman Beecher, Congregationalist minister, noted revivalist and reformer. When Harriet's mother lay dying, Lyman repeatedly spoke words to her that the family embraced as their life text, often repeating it to one another: "… Ye are come unto Mount Sion, and unto the city of the living God, the heavenly Jerusalem, and to an innumerable company of angels, to the general assembly and church of the firstborn, … and to the spirits of just men made perfect, and to Jesus the mediator of the new covenant, and to the blood of sprinkling, that speaketh better things than that of Abel." The noble thought embedded in these words would energize the unanswerable argument Uncle Tom's Cabin proclaimed: if a slave can come to Mount Sion and to Jesus and to the company of saints in the New Jerusalem, how can you set him up on an auction block and trade him from one white man to another?

In 1832 her father moved the family to the frontier city of Cincinnati, where he became president of Lane Seminary, soon a center for abolitionists. At 25 Harriet married Calvin Ellis Stowe, professor of biblical literature at Lane.

During her child-rearing years, she read to her seven children two hours each evening and, for a time, ran a small school in her home. She described herself as "a little bit of a woman, just as thin and dry as a pinch of snuff; never very much to look at in my best days and very much used-up by now, a mere drudge with few ideas beyond babies and housekeeping."

But a mere drudge she was not. She found time to write, partially to bolster the meager family income. An early literary success at age 32 (for a collection of short stories) encouraged her, but she still worried about the conflict between writing and mothering. Despite privation and anxiety, due largely to her husband's precarious health, she wrote continually and in 1843 published The Mayflower; or, Sketches of Scenes and Characters Among the Descendants of the Pilgrims. Her husband urged her on, predicting she could mold "the mind of the West for the coming generation." That she did with the publication of Uncle Tom's Cabin or Life Among the Lowly at age 40.

She had lived for 18 years in Cincinnati, separated only by the Ohio River from a slave-holding community in Kentucky; she gained firsthand knowledge of fugitive slaves and about life in the South from friends and through her contact with the "Underground Railroad" there. The secret network was started in defiance of the "Fugitive Slave Acts" (severe measures passed the year before that mandated the return of runaway slaves without trial) to help escaped slaves reach safety in the North or in Canada. Stowe herself helped some slaves escape.

But Stowe still brooded over how she could further respond. Then, during a church Communion service, the scene of the triumphant death of Tom flashed before her. She soon formed the story that preceded Tom's death.

In 1850 her husband became professor at Bowdoin College and moved his family to Brunswick, Maine. In Brunswick, Stowe wrote the story of Uncle Tom's Cabin for serial publication in the National Era, an antislavery paper of Washington, D.C., in 1851 and 1852 in 40 installments, each with a cliffhanger ending. Her name became anathema in the South. But elsewhere the book had an unparalleled popularity; it was translated into at least 23 languages. When it appeared in book form, it sold 1,000,000 copies before the Civil War. The dramatic adaptation of Uncle Tom's Cabin played to capacity audiences. Stowe reinforced her story with The Key to Uncle Tom's Cabin (1853), in which she accumulated a large number of documents and testimonies against slavery.

Its publication also inspired a reaction from the South: critical reviews and the publication of some 30 anti-abolitionist Uncle Tom novels within three years.

By literary standards, the novel's situations are contrived, the dialogue unreal, and the slaves romanticized. Still, Stowe communicated the absurdity of slavery through Tom's triumph over the brutal evil of Simon Legree.

"'How would ye like to be tied to a tree, and have a slow fire lit up around ye?' asked Legree. 'Wouldn't that be pleasant, eh, Tom?'

"'Mas'r,' said Tom, 'I know ye can do dreadful things, but'—he stretched himself upward and clasped his hands—'but after ye've killed the body, there ain't no more ye can do. And oh! there's all eternity to come after that!'"

Until her death in July 1896, Stowe averaged nearly a book a year, but Uncle Tom's Cabin was her legacy. Even one of her harshest critics acknowledged that it was "perhaps the most influential novel ever published, a verbal earthquake, an ink-and-paper tidal wave."

She thereafter led the life of a woman of letters, writing novels, of which The Minister's Wooing (1859) is best known, and many studies of social life in both fiction and essay. Stowe published also a small volume of religious poems and toward the end of her career gave some public readings from her writings.