Pilgrim who made progress in prison. 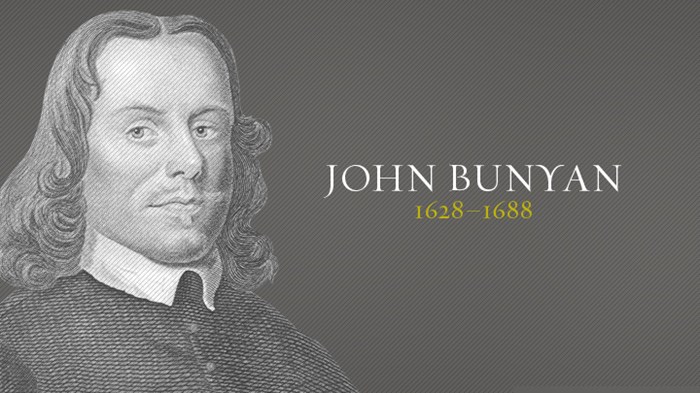 "I saw a man clothed with rags … a book in his hand and a great burden upon his back."

Successful English writers were, in John Bunyan's day, nearly synonymous with wealth. Men like Richard Baxter and John Milton could afford to write because they didn't need to earn a living. But Bunyan, a traveling tinker like his father, was nearly penniless before becoming England's most famous author. His wife was also destitute, bringing only two Puritan books as a dowry.

"We came together as poor as poor might be," Bunyan wrote, "not having so much household-stuff as a dish or spoon betwixt us both."

What allowed Bunyan to become the bestselling author of one of the most beloved books in the English language was when things actually got worse: an imprisonment of 12 years.

>Born in Elstow, Bedfordshire, Bunyan married at age 21. Those books his wife brought to the marriage began a process of conversion. Gradually, he gave up recreations like dancing, bell ringing, and sports; he began attending church and fought off temptations. "One morning as I did lie in bed," he wrote in his autobiography, "I was, as at other times, most fiercely assaulted with this temptation, to sell and part with Christ; the wicked suggestion still running in my mind, Sell him, sell him, sell him, sell him, sell him, as fast as a man could speak."

Bunyan was drawn to the Christian fellowship he saw among "three or four poor women sitting at a door ... talking abut the things of God." He was also befriended by John Gifford, minister at a Separatist church in Bedford.

The tinker joined the church and within four years was drawing crowds "from all parts" as a lay minister. "I went myself in chains to preach to them in chains," he said, "and carried that fire in my own conscience that I persuaded them to beware of."

>Bunyan's rise as a popular preacher coincided with the Restoration of Charles II. The freedom of worship Separatists had enjoyed for 20 years was quickly ended; those not conforming with the Church of England would be arrested. By January 1661, Bunyan sat imprisoned in the county jail.

The worst punishment, for Bunyan, was being separated from his second wife (his first had died in 1658) and four children. "The parting ... hath oft been to me in this place as the pulling the flesh from my bones," he wrote. He tried to support his family making "many hundred gross of long tagg'd [shoe] laces" while imprisoned, but he mainly depended on "the charity of good people" for their well-being.

Bunyan could have freed himself by promising not to preach but refused. He told local magistrates he would rather remain in prison until moss grew on his eyelids than fail to do what God commanded.

Still, the imprisonment wasn't as bad as some have imagined. He was permitted visitors, spent some nights at home, and even traveled once to London. The jailer allowed him occasionally to preach to "unlawful assemblies" gathered in secret. More importantly, the imprisonment gave him the incentive and opportunity to write. He penned at least nine books between 1660 and 1672 (he wrote three others—two against Quakers and the other an expository work—before his arrest).

Profitable Mediations, Christian Behavior (a manual on good relationships), and The Holy City (an interpretation of Revelation) were followed by Grace Abounding to the Chief of Sinners, considered the greatest Puritan autobiography. But from 1667 to 1672, Bunyan probably spent most of his time on his greatest legacy, The Pilgrim's Progress.

>Charles II eventually relented in 1672, issuing the Declaration of Indulgence. Bunyan was freed, licensed as a Congregational minister, and called to be pastor of the Bedford church. When persecution was renewed, Bunyan was again imprisoned for six months. After his second release, Pilgrim's Progress was published.

"I saw a man clothed with rags ... a book in his hand and a great burden upon his back." So begins the allegorical tale that describes Bunyan's own conversion process. Pilgrim, like Bunyan, is a tinker. He wanders from the City of Destruction to the Celestial City, a pilgrimage made difficult by the burden of sin (an anvil on his back), the Slough of Despond, Vanity Fair, and other such allegorical waystations.

The book was instantly popular with every social class. His first editor, Charles Doe, noted that 100,000 copies were already in print by 1692. Samuel Taylor Coleridge called it, "the best Summa Theologicae Evangelicae ever produced by a writer not miraculously inspired." Every English household that owned a Bible also owned the famous allegory. Eventually, it became the bestselling book (apart from the Bible) in publishing history.

The book brought Bunyan great fame, and though he continued to pastor the Bedford church, he also regularly preached in London. He continued to write. The Life and Death of Mr. Badman (1680) has been called the first English novel (since it is less of an allegory than Pilgrim's Progress), and was followed by another allegory, The Holy War. He also published several doctrinal and controversial works, a book of verse, and a children's book.

By age 59 Bunyan was one of England's most famous writers. He carried out his pastoring duties and was nicknamed "Bishop Bunyan." In August 1688, he rode through heavy rain to reconcile a father and son, became ill, and died.