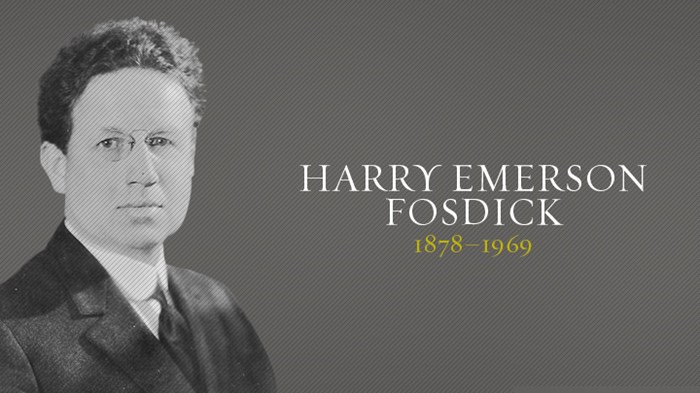 "I believe in the personal God revealed in Christ, in his omnipresent activity and endless resources to achieve his purposes for us and for all men."

Though "born again" at age 7, Harry Emerson Fosdick early on decided he wanted nothing to do with the born-again movement known as fundamentalism, just then coming into adolescence. Fosdick also rejected Calvinism, which he believed produced "a God who is a devil," and instead relied on his own personal spiritual experiences. The Lord was to be found in living experience, he argued, not at the end of some creed.

Fosdick, on the way to becoming the most celebrated preacher of his day, took some psychological and theological tumbles; yet he remained true to his early instincts, and as such, he mirrored the larger movements taking place in American Christianity. He became, as one biographer put it, "the most influential interpreter of religion to his generation."

In his high school and college years, Fosdick was already developing a reputation as "the Jesse James of the theological world" (later in life he boasted that he had never repeated the Apostles' Creed). At Colgate University, under the tutelage of liberal William Newton Clarke, he studied the divide between religious experiences and the intellectual and cultural forms in which they were expressed: "We must distinguish between abiding experiences and changing categories," he wrote. From there he went on to New York's Union Theological Seminary.

In 1903 he was ordained at the Madison Avenue Baptist Church, and in 1911, he joined the Union faculty while accepting the pastorate at First Baptist Church in Montclair, New Jersey. His preaching reputation grew, but it was his writing that drew him to the nation's attention to him. Six early devotional books (among others, The Meaning of Faith and The Meaning of Prayer) sold in the millions.

He rejected a pessimistic Christianity that wallowed in sin or forecast doom for the planet. In spite of his experiences ministering in inner-city ghettos and French trenches (which he visited during World War I), he remained confident about the future: "I believe in the personal God revealed in Christ, in his omnipresent activity and endless resources to achieve his purposes for us and for all men."

From 1918 to 1925, Fosdick, though a Baptist, served as minister of First Presbyterian Church in New York, where his eloquence earned him a reputation among liberals and conservatives alike. The pressure built as fundamentalists worried aloud about Fosdick's brand of Christianity. Fundamentalist intellectual J. Gresham Machen asked, "The question is not whether Mr. Fosdick is winning men, but whether the thing to which he is winning them is Christianity."

In a May 1922 sermon, "Shall the Fundamentalists Win?" Fosdick replied by repudiating the core beliefs of the fundamentalist faith: belief in the virgin birth was unnecessary; the inerrancy of Scripture, untenable; and the doctrine of the Second Coming, absurd. Though he ended on a note of reconciliation, in the sermon he castigated fundamentalists as "bitterly intolerant."

Baptist oil baron John D. Rockefeller, the wealthiest man in the nation, loved it and paid for some 130,000 copies to be printed and distributed to every Protestant minister in the United States. What had been up to this time a series of skirmishes between fundamentalists and liberals now exploded into war.

Presbyterian William Jennings Bryan sought to expose Fosdick's "utter agnosticism" to the New York Presbytery and the General Assembly and have him dismissed from First Presbyterian. Debate raged across the nation, with prominent periodicals taking sides. Fosdick tried to be conciliatory, but he refused to budge theologically or become a Presbyterian to retain his pulpit. By 1924 he felt compelled to resign.

In May of the following year, he became pastor of Park Avenue Baptist Church in New York, and then moved on to newly built (thanks to Rockefeller money) Riverside Church, a modern Gothic cathedral seating over 2,300. For the last 16 years of his active ministry, and for the following 28 of his retirement, it was Fosdick's church home, where he practiced his liberal values (for example, offering worship in a variety of styles, from Quaker style to high church) and speaking out on key issues of the day (he was a champion of civil liberties, for instance, and invited blacks to preach from his pulpit).

Fosdick was no diehard liberal, and in 1935, he shocked his progressive colleagues with a sermon, "The Church Must Go Beyond Modernism." Incorporating the emerging neo-orthodox themes of Karl Barth and Reinhold Niebhur, he criticized liberalism's habit of changing beliefs to accommodate culture, of softening the reality of God and downplaying the themes of personal and social sin.

Since 1927 Fosdick's sermons had been broadcast from Boston to Chicago on the "National Vespers Hour," and more than 2 million listeners tuned in. For the most part, he concentrated on practical and experiential Christianity, defining preaching as "personal counseling on a group scale."

The personal emphasis didn't end in the pulpit—he did a great deal of counseling of individuals, and his On Being a Real Person, influenced by Freud, Jung, and his own personal experiences (he'd had a nervous breakdown in seminary), was a pioneering book in the newly emerging field of pastoral counseling.

As one historian put it, Fosdick's life was "the biopsy of an epoch." His ministry spanned two world wars and, in retirement, reached to Vietnam. In his 50 books, thousands of sermons, articles, and lectures, he walked hand-in-hand with American liberal Christianity as it made its way through the tumult of the first six decades of the twentieth century.