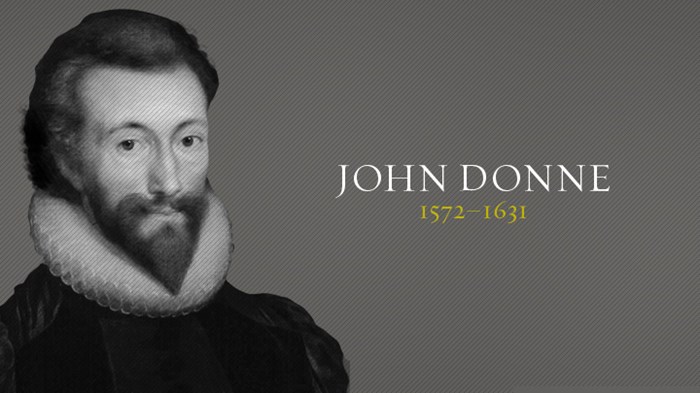 "Death, be not proud, though some have called thee Mighty and dreadful, for thou art not so."

"Lo," preached the newly ordained minister, quoting the Book of Lamentations at the funeral of his wife, "I am the man that hath seen affliction."

Indeed, from the death of his father to his own, John Donne witnessed much affliction. The Black Plague was repeatedly sweeping through London—three waves during his 10-year tenure as dean of St. Paul's Cathedral—killing tens of thousands with each recurrence. For months Donne thought himself a sure victim of the disease. Throughout his life, he withstood financial ruin, the destruction of his family, religious persecution, and other plagues. Yet, he became one of England's greatest love poets, and one of the greatest preachers of the 1600s.

Donne was born to an old Roman Catholic family when anti-Catholicism was running high in England. At age 2, his grand-uncle was hanged for being a priest, and his father died of more natural causes when he was 4. His younger brother Henry died in prison, having been arrested for sheltering a priest. Donne himself, a noteworthy student at both Oxford and Cambridge, was refused a degree at both schools because of his faith.

Sometime during this period, Donne converted to the Church of England, and in 1596 sailed as a gentleman-adventurer on a naval expedition against Spain. When he returned, he was appointed the private secretary to the Lord Keeper of the Great Seal, sat in Queen Elizabeth's last Parliament, made connections, and continued his lustful ways. Then England's greatest love poet fell in love.

Her name was Anne More—the niece (by marriage) of the wife of his boss. As she was only 17 (Donne was then nearly 30), they married in secret. Her father was furious and had Donne immediately thrown into jail and removed from his post. Imprisoned, he wrote a characteristic pun, "John Donne, Anne Donne, Undone."

Though Donne was quickly released, the two lived in poverty for the next 13 years. Adding to the poverty, Anne bore 12 children (five of whom died in childhood). Donne, plagued also by headaches, intestinal cramps, and gout, fell into a deep depression. His longest work of that period was an essay endorsing and contemplating suicide: "Whensoever any affliction assails me, methinks I have the keys of my prison in mine own hand and no remedy presents itself so soon to my heart as mine own sword."

During this time, he also began studying religion more closely. One of two anti-Catholic works he published, Pseudo-Martyr, earned him the favor of King James I because it argued Catholics could pledge allegiance to the king without renouncing their faith.

The object of his poetry now became God, and he employed the same degree of ardor and amorousness as ever. He reasoned, "God is love." He took a page from Solomon, whom he observed "was amorous, and excessive in the love of women: when he turned to God, he departed not utterly from his old phrase and language, but ... conveys all his loving approaches and applications to God."

Thus, even some of his "Holy Sonnets" had amorous overtones:

Batter my heart, three-person'd God; for you
As yet but knock, breathe, shine, and seek to mend;
That I may rise, and stand, o'erthrow me, and bend
Your force to break, blow, burn, and make me new …
Take me to you, imprison me, for I
Except you enthrall me, never shall be free,
Nor ever chaste, except you ravish me.

Friends encouraged Donne, deemed by some critics to be a pornographer, to become a priest in the Church of England. Donne repeatedly refused, lamenting that "some irregularities of my life have been so visible to some men." But when King James refused to employ him anywhere but the church, Donne relented. He was granted a doctorate of divinity from Cambridge and took his first parish job in 1616.

The following year, Anne died. Grief-stricken, Donne pledged never to marry again and threw himself at his work. It seems to have done wonders for his vocation. By 1621 he was dean of St. Paul's Cathedral and the foremost preacher of his day. One hundred sixty of his sermons still survive.

In 1623 Donne fell seriously ill and believed he was dying of the plague. Unable to read but able to write, he penned his famous Devotions upon Emergent Occasions. In it, he records hearing church bells tolling a declaration of death, which he mistook to be an announcement of his own demise. When he realized they were for another, he penned one of literature's most famous lines: "No man is an island, entire of himself; ... therefore never send to know for whom the bell tolls; it tolls for thee."

Eight years later, the bell did toll for Donne, who died of stomach cancer about a month after preaching his famous "Death's Duel" sermon. Though he has occasionally been accused of an obsession with death (a claim backed up by his 54 songs and sonnets, 32 of which center on the topic), his poetry, sermons, and other writings clearly show his affinity for what lay beyond the tolling bells:

Death, be not proud, though some have called thee
Mighty and dreadful, for thou art not so …
One short sleep past, we wake eternally,
And death shall be no more; Death, thou shalt die.