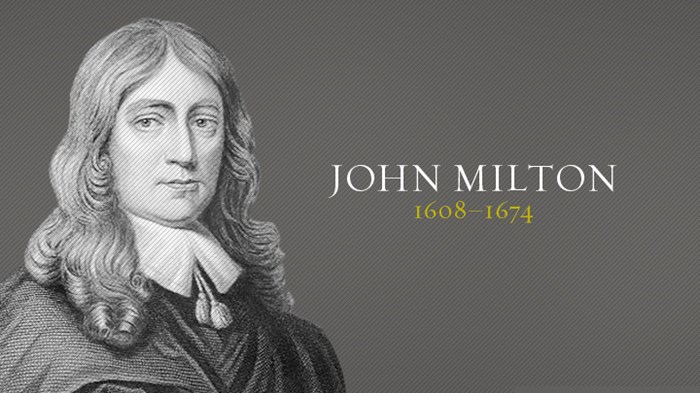 "Who kills a man kills a reasonable creature, … but he who destroys a good book kills reason itself."

As a young man, John Milton wrote a friend: "Do you ask what I am meditating? By the help of Heaven, an immortality of fame." Not many can actually achieve such a goal, but Milton did. Next to William Shakespeare, he is regarded by many as the greatest English poet and the author of the language's finest epic poem.

Describing his childhood, Milton wrote, "I was born in London, of a good family, my father a very honorable man"—a man who was disinherited by his Roman Catholic family because he converted to Protestantism. Like his father, Milton became a talented musician, with a "delicate tunable voice and great skill." By age 9, he was writing verse and polishing his Latin and Greek under private tutors, and by the time he left for Cambridge at age 17, he had also begun learning French, Italian, and Hebrew.

He was hardworking and successful: an early biographer said he "was a very hard scholar at the University, and performed all his exercises there with very good applause." But he was also contentious, and as a contemporary put it, Milton "was esteemed to be a virtuous and sober person, yet not to be ignorant of his own parts." He was called "the lady of Christ's" (he was a member of Christ's College, Cambridge)—a tribute to his good looks and sarcasm about his austere life, a life Milton later described as "aloof from vice, and approved by all the good."

Milton left the university in July 1632 with bachelor's and master's degrees. He settled down, with his aging parents, at the family estate in Horton. He now gave himself to attempt "things unattempted yet in prose or rhyme." Of his six years at Horton, he said, "On my father's estate I enjoyed an interval of uninterrupted leisure, which I devoted to the perusal of Greek and Latin authors." At Horton he wrote the poems "L'Allegro," "Il Penseroso," "Comus," "Lycidas," and some sonnets. Though he thought of them as preliminary exercises, they still rank high in English poetry.

In 1637, as he approached his thirtieth year, solitude and obscurity began to irk Milton, so he set out on a continental tour—Paris, Florence (where "I found and visited the famous Galileo, grown old, a prisoner of the Inquisition"), Rome, and Naples. When he heard that civil war was brewing in England, he abandoned further travel: "I thought it disgraceful, while my fellow citizens fought for liberty at home, to be travelling for pleasure abroad."

The poet settled in London, resumed his studies, and began to swim in "the troubled sea of noises and hoarse dispute" as a writer of pamphlets. His first pamphlet, published in 1641, was the opening volley of 20 years of political warfare. He attacked the corruptions of state and church while upholding the ideals of the Puritan party.

In the spring of 1642, the 33-year-old Milton married Mary Powell, the 17-year-old daughter of royalists. It was an unhappy marriage. Mary came from a large family and found Milton's quiet, bookish existence lonely. After a month, she returned to her family and remained there three years until she and her husband were reconciled.

His troubled marriage shocked Milton, and he set out to write The Doctrine and Discipline of Divorce, in which he argued that incompatibility—not just adultery—was grounds for divorce. The pamphlet was greeted by a storm of protest. When the government sought to prosecute him for having published without a license, Milton penned Areopagitica, which many consider the finest defense of freedom of the press ever written. "Who kills a man kills a reasonable creature," he wrote, "but he who destroys a good book kills reason itself."

In 1649, shortly after the execution of Charles I, he published The Tenure of Kings and Magistrates, becoming the first person to uphold the right of the people to execute a guilty sovereign. The following month, he was appointed secretary for foreign tongues, to correspond with foreign states and to write pamphlets defending the actions of the new government.

For years, Milton's eyesight had been suffering, and in 1652 complete blindness overcame him. Worse still, all his political ideals and hopes were crushed eight years later when the Commonwealth disintegrated and the monarchy was restored. In Milton's view, the event was spurred by the "epidemic madness and general defection of a misguided and abused multitude."

When Charles II landed in 1660, Milton was forced into hiding, was eventually arrested, and all copies of his Puritan pamphlets were burned. Only through the good offices of powerful friends at court did he escape prosecution.

By then Milton was blind, embittered, and hampered by insufficient finances. But he was free to again take up his grand poetic task. Few images in the history of literature are more poignant that of the blind Puritan dictating day after day his great epic, Paradise Lost, the theme of which is announced in the opening lines:

Of man's disobedience, and the fruit
Of that forbidden tree, whose mortal taste
Brought death into the world, and all our woe,
With loss of Eden.

He rose at four or five in the morning, listened to a chapter from the Hebrew Bible, ate breakfast, and then wrote until noon. After an hour walk and another hour playing the organ or viola, he worked until night. Then he would have a supper of "olives or some light thing," a pipe, and a glass of water.

In 1667, the work was complete, and the world received the book that would influence English thought and language nearly as much as the King James Version and the plays of Shakespeare.