"Servant of the Servants of God" 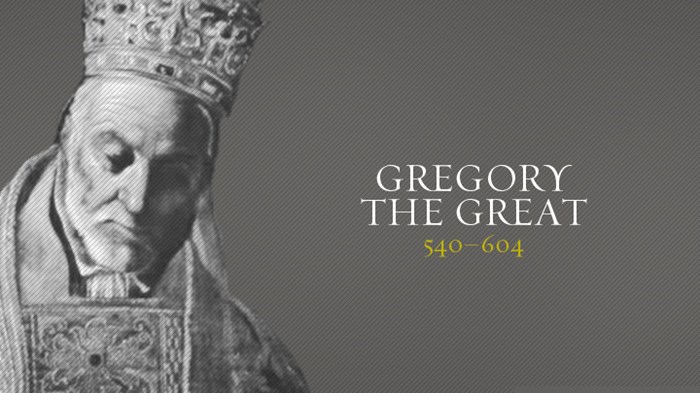 "Act in such a way that your humility may not be weakness, nor your authority be severity. Justice must be accompanied by humility, that humility may render justice lovable."

Gregory, before he became pope, happened to see some Anglo-Saxon slaves for sale in a Roman marketplace. He asked about the race of the remarkable blond men and was told they were "Anglos." "Not Anglos, but angels," he was said to reply. As a result, it is said, Gregory was later inspired to send missionaries to England.

Though apocryphal, the story shows a devout Gregory concerned about the spread of Christian faith. But this was but one facet of Gregory's extraordinary talent and energies.

Gregory was descended from Roman nobles with a strong legacy of Christian faith. He was related to two previous popes (Felix III and Agapitus I), his aunts were nuns, and his parents joined cloisters in their later years. He was raised in Rome when it was only a shell of its former glory.

By the age of 30, he was the chief administrative official of the city, responsible for finances, police, provisioning, and public works—an experience that helped him hone his administrative skills and, together with his personal wealth, gave him the opportunity to create six monasteries.

Yet Gregory remained dissatisfied, and upon his father's death in 574, he converted his house into a monastery and retired to a life of contemplation and prayer. During these years, the happiest in Gregory's life, he began a detailed study of the Scriptures. Here he also ruined his health with fasting, a sacrifice that would precipitate his early death.

His administrative skills did not remain unappreciated. In 577 Pope Benedict appointed Gregory one of the seven deacons of Rome, and Pope Pelagius II sent him to Constantinople in 578 as representative to the imperial court, then later recalled him to serve as his confidential adviser.

In 589 a flood destroyed the grain reserves of Rome, instigating a famine and then a plague that swept through Rome and killed Pope Pelagius. Gregory was elected to succeed him. Though he had tried to refuse the office, once elected, he went to work with vigor.

To deal with the famine, Gregory instituted a city-wide penance, fed people from the church's granaries, and organized systematic relief for the poor.

Gregory then set himself reforming the church. He removed high officials "for pride and misdeeds," enforced celibacy, replaced lay officers with monks, and initiated a reorganization of "the patrimony of Peter," the vast land holdings of the church. The efficient and humane management of these estates brought in the revenue necessary to run the church as well as perform tasks the imperial government was neglecting.

An attack by the Lombard invaders in 592 and the inaction of the imperial representative forced Gregory to negotiate an end to the siege of Rome. When the imperial representative broke the truce in 593, Gregory purchased a separate peace treaty with tributes from the church coffers. By this time in Roman history, the pope had become the unofficial civil ruler of Italy, appointing generals, arranging relief, rallying cities to the defense, and paying the salaries of soldiers.

Gregory also was actively concerned about the work of priests. He wrote a book of instruction for bishops, On Pastoral Care, in which he wrote, "Act in such a way that your humility may not be weakness, nor your authority be severity. Justice must be accompanied by humility, that humility may render justice lovable." It became a manual for holy life throughout the Middle Ages.

Gregory believed preaching was one of the clergy's primary duties, and he conducted a preaching tour of area churches. His Homilies on the Gospels was published in 591 and widely used for hundreds of years.

In 593 Gregory published his Dialogues, a history of the lives of Italian saints, as well as his sermons on Ezekiel and the Song of Songs. In 595 he published his allegorical exposition on Job, Moralia, and made changes to the liturgy. His interest in church music has been honored, as well: his name has been given to the plainsong ("Gregorian chant") that developed over the next few hundred years.

His frequent correspondence across the world shows him well aware of evangelistic opportunities in Britain. So it is not surprising that in 596 he sent Augustine, along with 40 monks, on a mission to "this far corner of the world."

Gregory set a high mark for the medieval papacy. He defended the primacy of the chair of Peter against even the smallest slight. He reconciled many independent bishops to Rome by humble appeals, not defending his personal rights but those of the institution. He was the first pope to call himself Servus Servorum Dei, "the servant of the servants of God," a title still in use today.

The administrative framework he set in place for the management of church lands made possible the development of the Papal States. His encouragement of the monastic life, his friendship with the kings of Spain and Gaul, and his deferential yet independent relationship with the emperor set a pattern for church-state relations for centuries.

He is one of the four great Latin doctors of the church (along with Ambrose, Augustine, and Jerome), and upon his death he was named a saint by popular acclaim.