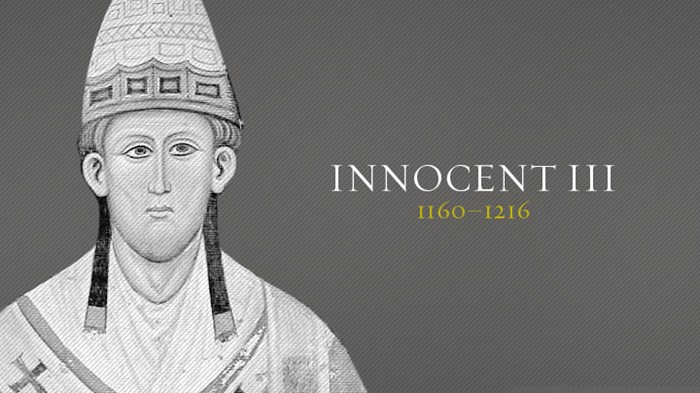 "Verily the representative of Christ, the successor of Peter, the anointed of the Lord, the God of Pharaoh set midway between God and man, below God but above man, less than God but more than man, judging all other men, but himself judged by none."

When England's King John refused Pope Innocent's appointee for archbishop of Canterbury in 1208, Innocent placed the nation under interdict; the church would not marry, baptize, or bury anyone. John retaliated by expelling most of the bishops, but that only made matters worse. Innocent excommunicated the king, declared the throne vacant, and invited the French to invade. John finally recognized Innocent as his superior in 1213. But even then the pope had a quarrel—he declared the Magna Carta void because John had entered into it without his consent.

Such was the power of Innocent III, the first pope regularly to style himself the "Vicar of Christ."

Lotario Scotti was born into a noble Italian family and sent to the finest schools. He studied theology in Paris and canon law in Bologna. He was entrusted with important tasks by Popes Lucias III and Gregory VIII. At 30, his uncle, Pope Clement III, made him a cardinal. The day after Pope Celestine III died, Innocent became one of the youngest men ever selected to sit in Peter's Chair. He was quickly ordained as a priest and the next day consecrated Innocent III.

Innocent was born to rule; he was exceptionally gifted in intellect, will, and leadership. He was the foremost church lawyer of the age. Still, he had a combative spirit and was prone to fits of depression.

He began his reign by purging church officials not loyal to him and by curbing excesses of his own household. Plates of gold were exchanged for wood, and nobles from royal families were replaced by monks. He reasserted control over the papal estates, though after an attempt on his life, he gave his family charge of key cities.

Innocent saw the pope as feudal overlord of all secular rulers—"not only over the universal church, but the whole world." He thought of his office in a semi-Divine light: "Verily the representative of Christ, the successor of Peter, the anointed of the Lord, the God of Pharaoh set midway between God and man, below God but above man, less than God but more than man, judging all other men, but himself judged by none."

The death of Holy Roman Emperor Henry VI in 1197 gave him the opportunity to put this theory into practice by arbitrating between the rivals for the imperial throne. He conceded the right of the imperial electors to select a candidate, but he insisted he make the final appointment. He first selected Otto of Brunswick, who promised to recognize the enlarged Papal States and renounce any claim to the assets of deceased church officials. When Otto invaded Italy (breaking his promise to Innocent), Innocent excommunicated him and installed his own ward, Frederic II, as Holy Roman emperor.

Innocent could truthfully declare that kings held their crown by virtue of the "grace of God and of the pope." He maneuvered European monarchs like pawns on a chess board and accepted the gift of countries like Spain and Hungary as matters of course. He compelled Philip of France to take back the wife he divorced. Innocent corresponded with the eastern emperor about reunion until the Fourth Crusade was diverted on its way to Egypt and ended up sacking Constantinople in 1204. Turning the fait accompli to his best advantage, Innocent set up a Latin rite church in the ruins.

The thirteenth century was a time of religious ferment, which saw the eruption of sects—orthodox, heretical, and schismatic—reacting to church corruption. After trying persuasion with the heretical Albigensians, Innocent declared a bloody crusade against them. More than 15,000 peasants were slaughtered in one town alone.

Innocent instituted a wide-ranging series of church reforms. Clergy excesses from luxurious clothing to drunken carousing were attacked. He promoted honest business practices in the church, encouraged provincial and national councils, required bishops to visit Rome every four years, restored observation of rules in religious orders, and encouraged the foundation of schools. During his reign, he recognized and gave patronage to two newly established reform groups, the Franciscans and the Dominicans. He issued over 6,000 decrees and formalized many of his reforms with the Fourth Lateran Council—where the term "transubstantiate" (meaning, the bread of Communion becomes the real body of Christ) was first officially used.

Innocent died of recurring fevers on a trip to settle a dispute between Pisa and Genoa, a dispute he feared would hinder his next crusade.