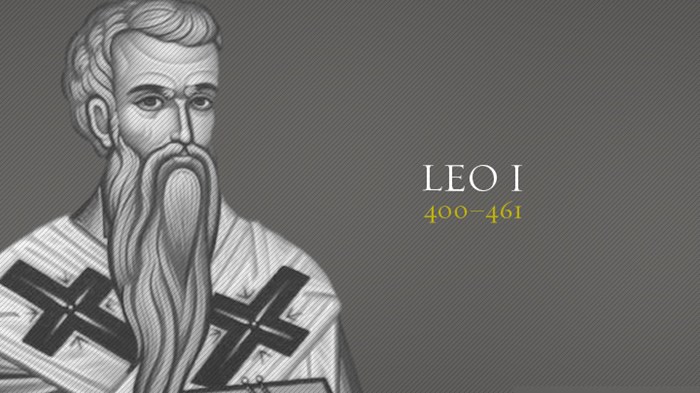 "As the primacy of the apostolic see is based on the title of the blessed Peter, … no illicit steps may be taken against this see to usurp its authority."

During his papacy, Leo I condemned heretics, convinced emperors to call councils, and then ignored certain rulings of those councils—all in an effort to make the bishop of Rome the uncontested head of the church. But it was a conversation with the infamous Attila the Hun and the Vandal general that probably did his cause the most good.

No more "first among equals"

By the time history is aware of Leo, he was a proud nobleman of Roman or Tucsan heritage. (As pope he forbade the elevation to bishop of any former slaves, as "such baseness" would pollute the Holy service.) He was an influential deacon deeply involved in civil and ecclesiastical affairs, and he opposed heresy. Leo convinced Pope Celestus I to hear his brief against the Nestorians, and he helped to stiffen Pope Sixtus I's resolve against Pelagians.

His succession to the papacy came "as a matter of course." In his elevation address, he sounded a major theme of his reign: the primacy of the "Chair of Peter" above all other bishops.

"The firmness given by Christ the rock to him who himself was made the rock passes to his heirs," he argued, "and wherever their firmness appears, the power of the Shepherd is manifest." Leo abandoned the traditional doctrine that the bishop of Rome was "first among equals" and declared that he spoke as Peter: "Believe that it is he himself, whom in our office we represent, who is speaking."

As pope, Leo continued to fight heresy and, at the same time, to extend his authority. In 443 he disciplined Hilary of Arles, who was outside imperial borders, for practicing too much independence, and in 445 he gained imperial recognition of his rights inside the empire: "As the primacy of the apostolic see is based on the title of the blessed Peter, … no illicit steps may be taken against this see to usurp its authority."

Over the next few years, he talked Emperor Valentinian III into enforcing civil penalties against the Manichaeans. Similarly, the bishop of Spain began stamping out the Priscillians at Leo's request. His most important case began as an appeal by a monk accused of teaching that Christ had only a divine nature—the Monophysite heresy.

Leo repudiated the monk, Eutyches, in a long letter (the "Tome of Leo") and appealed to Emperor Marcian—an old friend who had just assumed office—to call a church council. More than 500 bishops gathered at Chalcedon, a suburb of Constantinople, in 453. They condemned Eutyches and denounced the Monophysities.

Facing down the conquerors

During these years, the empire in the West was crumbling, and "barbarian" armies were taking advantage of Rome's weakness. In 452, when the Huns threatened Rome, Leo went out to meet their leader, Attila, "the Scourge of God," and convinced him to withdraw to beyond the Danube.

When three years later, the Vandal general Gaiseric marched on Rome, Roman soldiers panicked, murdered the emperor, and fled the city. Leo met with Gaiseric and begged for mercy, noting that the city had fallen without a struggle and that only civilians remained. He asked that the Vandal not slaughter the people nor burn their homes. Gaiseric listened silently, then spurred his horse away, calling over his shoulder, "Fourteen days looting." Two weeks later the Romans held a solemn service of thanksgiving for the city having been spared.

Leo's leadership in these political crises helped begin the long process by which the bishop of Rome became the most powerful Western figure in the Middle Ages. This, along with his vigorous pursuit of doctrinal purity and administrative savvy, have led to his being called, with only two other popes, "the Great."