Emperor who made Christianity "the" Roman religion 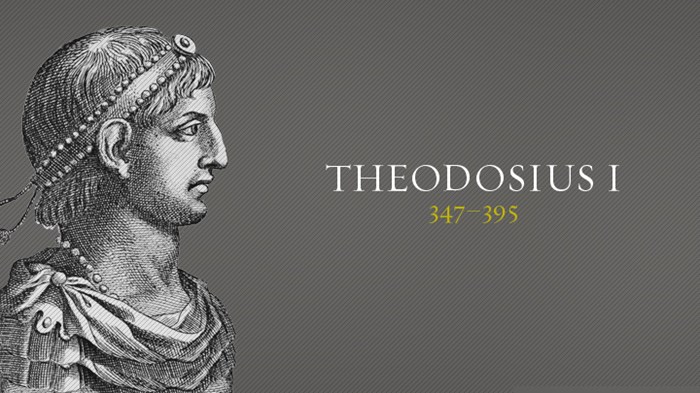 "He … earned the title 'the Great' because of his devout Christianity."
—Michael Grant

In lists of Roman Emperors, Theodosius is far from the most notable. One historian noted that this son of an emperor killed for high treason "veered disconcertingly between opposites—febrile activity and indolent sluggishness, a simple soldierly life and the splendors of the court." But this little-known emperor forever changed the course of Christian history not in one way, but in two. He used his power to officially enforce orthodox Christianity, but ended up placing his power under that of the church, setting a standard for more than a millennium.

The blond, elegant Theodosius began his imperial career in the usual manner. He was born in northwest Spain, to a father who was a talented military commander. Theodosius learned his military lessons by campaigning with his father's staff in Britain and elsewhere.

After being crowned emperor in the East (379), he continued to battle German tribes in the north, but finally worked out a unique arrangement with them: for exchange of land and provisions, their soldiers would serve under the Roman banner when needed. It was a novel idea for the time, an arrangement that later emperors would depend on more and more.

To pay for this expanded army, however, Theodosius raised taxes brutally. "No man shall possess any property that is exempt from taxation," he decreed. City magistrates, who were responsible for collecting taxes, were flogged if they failed to levy taxes efficiently.

Yet it wasn't just tax dodgers that caught his attention, but heretics and pagans as well.

Early in his reign, during a serious illness, Theodosius had accepted Christian baptism. In 380 he proclaimed himself a Christian of the Nicene Creed, and he called a council at Constantinople to put an end to the Arian heresy (which, contrary to Nicene doctrine, claimed Jesus was created), which had divided the empire for over half a century. One hundred and fifty bishops gathered and revised the Nicene Creed of A.D. 325 into the creed we know today. Arianism has never made a serious challenge since.

Having won that victory, Theodosius tried to ram through his choice for patriarch of Constantinople, but the bishops rebelled and demanded he appoint a bishop from a short list they created. It was the first of many instances in Theodosius's reign in which the church got the better of him.

The most famous example came in 387: When the city of Thessalonica rioted because a favored charioteer was imprisoned (for homosexuality), Theodosius ordered revenge: a chariot race was announced, citizens gathered in the arena, the gates were locked, and soldiers were set upon the crowd. By the end of the day, 7,000 had perished.

Ambrose, the bishop of Milan who was a spiritual and political adviser to Theodosius, was furious. He refused to give Theodosius Communion until the emperor performed public penance: he must put aside his royal garments, don a shroud, and publicly plead for God's mercy.

When Theodosius consented, it marked a new chapter in the history of church and state. For the first time, a secular ruler submitted to the church. Less than a century earlier, emperors were trying to wipe out the church.

Theodosius, for his part, tried to reverse that legacy by persecuting heretics and pagans. Arians and Manichaeans (dualists) were condemned and driven underground. One edict prohibited public discussion of any religious questions! Finally, in 391, pagan temples were closed and pagan worship forbidden. Later Roman historians, like Zosimus, looked back on this Christianization of the empire as the cause for the fall of Rome (a charge Augustine refuted in his City of God).

Theodosius ended his reign by defeating political enemies in the West, so that by late 394, he stood alone as emperor of a once-more united empire. The moment was brief, however, as Theodosius was dead within five months.

Church and StateInternationalRomeTheodosius I
131 Christians Everyone Should Know