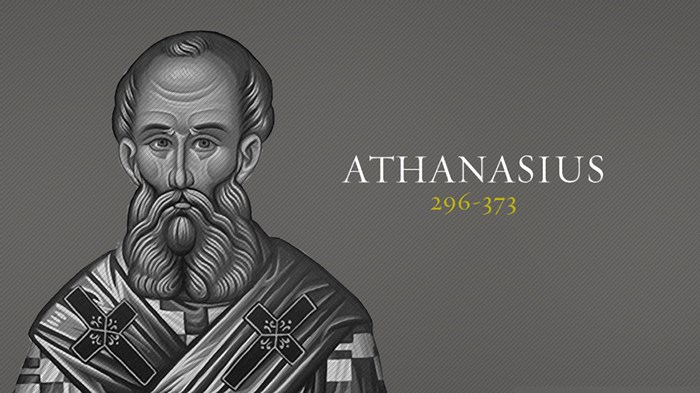 "Those who maintain 'There was a time when the Son was not' rob God of his Word, like plunderers."

"Black Dwarf" was the tag his enemies gave him. And the short, dark-skinned Egyptian bishop had plenty of enemies. He was exiled five times by four Roman emperors, spending 17 of the 45 years he served as bishop of Alexandria in exile. Yet in the end, his theological enemies were "exiled" from the church's teaching, and it is Athanasius's writings that shaped the future of the church.

Most often the problem was his stubborn insistence that Arianism, the reigning "orthodoxy" of the day, was in fact a heresy.

The dispute began when Athanasius was the chief deacon assistant to Bishop Alexander of Alexandria. While Alexander preached "with perhaps too philosophical minuteness" on the Trinity, Arius, a presbyter (priest) from Libya announced, "If the Father begat the Son, then he who was begotten had a beginning in existence, and from this it follows there was a time when the Son was not." The argument caught on, but Alexander and Athanasius fought against Arius, arguing that it denied the Trinity. Christ is not of a like substance to God, they argued, but the same substance.

To Athanasius this was no splitting of theological hairs. Salvation was at issue: only one who was fully human could atone for human sin; only one who was fully divine could have the power to save us. To Athanasius, the logic of New Testament doctrine of salvation assumed the dual nature of Christ. "Those who maintain 'There was a time when the Son was not' rob God of his Word, like plunderers."

Alexander's encyclical letter, signed by Athanasius (and possibly written by him), attacked the consequences of the Arians' heresy: "The Son [then,] is a creature and a work; neither is he like in essence to the Father; neither is he the true and natural Word of the Father; neither is he his true wisdom; but he is one of the things made and created and is called the Word and Wisdom by an abuse of terms… Wherefore he is by nature subject to change and variation, as are all rational creatures."

The controversy spread, and all over the empire, Christians could be heard singing a catchy tune that championed the Arian view: "There was a time when the Son was not." In every city, wrote a historian, "bishop was contending against bishop, and the people were contending against one another, like swarms of gnats fighting in the air."

Word of the dispute made it to the newly converted Emperor Constantine the Great, who was more concerned with seeing church unity than theological truth. "Division in the church," he told the bishops, "is worse than war." To settle the matter, he called a council of bishops.

Of the 1,800 bishops invited to Nicea, about 300 came—and argued, fought, and eventually fleshed out an early version of the Nicene Creed. The council, led by Alexander, condemned Arius as a heretic, exiled him, and made it a capital offense to possess his writings. Constantine was pleased that peace had been restored to the church. Athanasius, whose treatise On the Incarnation laid the foundation for the orthodox party at Nicea, was hailed as "the noble champion of Christ." The diminutive bishop was simply pleased that Arianism had been defeated.

Within a few months, supporters of Arius talked Constantine into ending Arius's exile. With a few private additions, Arius even signed the Nicene Creed, and the emperor ordered Athanasius, who had recently succeeded Alexander as bishop, to restore the heretic to fellowship.

When Athanasius refused, his enemies spread false charges against him. He was accused of murder, illegal taxation, sorcery, and treason—the last of which led Constantine to exile him to Trier, now a German city near Luxembourg.

Constantine died two years later, and Athanasius returned to Alexandria. But in his absence, Arianism had gained the upper hand. Now church leaders were against him, and they banished him again. Athanasius fled to Pope Julius I in Rome. He returned in 346, but in the mercurial politics of the day, was banished three more times before he came home to stay in 366. By then he was about 70 years old.

While in exile, Athanasius spent most of his time writing, mostly to defend orthodoxy, but he took on pagan and Jewish opposition as well. One of his most lasting contributions is his Life of St. Antony, which helped to shape the Christian ideal of monasticism. The book is filled with fantastic tales of Antony's encounters with the devil, yet Athanasius wrote, "Do not be incredulous about what you hear of him… Consider, rather that from them only a few of his feats have been learned." In fact, the bishop knew the monk personally, and this saint's biography is one of the most historically reliable. It became an early "best-seller" and made a deep impression on many people, even helping lead pagans to conversion: Augustine is the most famous example.

During Athanasius's first year permanently back in Alexandria, he sent his annual letter to the churches in his diocese, called a festal letter. Such letters were used to fix the dates of festivals such as Lent and Easter, and to discuss matters of general interest. In this letter, Athanasius listed what he believed were the books that should constitute the New Testament.

"In these [27 writings] alone the teaching of godliness is proclaimed," he wrote. "No one may add to them, and nothing may be taken away from them."

Though other such lists had been and would still be proposed, it is Athanasius's list that the church eventually adopted, and it is the one we use to this day.