David Horsey of the Seattle Post-Intelligencer believes that at least those in Colorado will stick to the Republicans. Horsey attended New Life Church, formerly led by Ted Haggard. After a lengthy description of a megachurch worship service, he describes his talk with New Life's associate pastor Rob Brendle.

The pastor thinks the country needs "a morally principled diplomat in the White House" like Mitt Romney, not a religious leader like Mike Huckabee. Nothing would be worse for Christian conservatives than a candidate who scared the rest of America with too much focus on his faith, he said.

The cartoonist then wanted to know, "What about the Democrats?" since the Democrats have been making an emphasis on religion in their campaigns. Horsey writes that the pastor laughed and said he'd seen it before. He was in a meeting with John Kerry ... 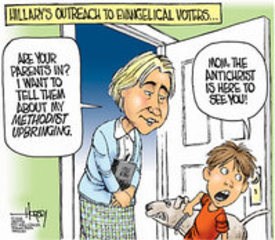