On Friday, the trustees of Northern Baptist Theological Seminary elected a new president, ending a two year interim since the departure of Chuck Moore for Hillside Chapel in Dayton, Ohio. 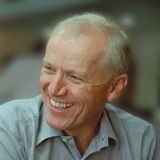 The new president is a Scot - Alistair Brown, general director of the Baptist Missionary Society in Didcot, Oxfordshire, UK. Brown has a Ph.D. in New Testament from the University of Edinburgh and an MBA from the Open University. Before his 12 year stint at the BMS, he was for 10 years senior pastor of a church in Aberdeen.