While aides scour the nation's capital for a new spiritual home for the first family, the Obamas spent Easter Sunday at an historic Episcopal church across the street from the White House. 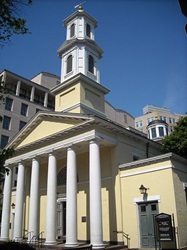 It took the presidential motorcade less than two minutes to drive from 1600 Pennsylvania Ave. to St. John's of Lafayette Square, a small, yellow Episcopal church with an impressive presidential pedigree.

Every U.S. president since James Madison has attended a worship service at St. John's, according to the church, which reserves a pew – No. 54 – whenever the chief executive attends. Former President George W. Bush, a Methodist, made St. John's his unofficial D.C. church home; John Quincy Adams, James Monroe and Franklin Delano Roosevelt also worshipped there, said Gary S. Smith, a historian at Grove City College in Pittsburgh.

Obama himself attended St. John's, sometimes called the "church of the presidents," for a pre-inaugural prayer service on Jan. 20; several days earlier, he visited Nineteenth Street Baptist Church, one of the city's oldest black churches.

Joshua DuBois, head of the White House Office of Faith-based and Neighborhood Partnerships, said the Obamas have "not made a decision yet on which church they will formally join in Washington, but they were honored to worship with the parishioners at St. John's Episcopal Church and at Nineteenth Street Baptist Church earlier this year."

Decked out in Easter attire, all four Obamas – the president, first lady Michelle, and daughters Sasha and Malia – received Communion and heard the Rev. Luis Leon preach about the tension between faith and doubt.

It has also taken time – nearly three months and counting – for the Obamas to find a new spiritual home. They left Trinity United Church of Christ in Chicago, where they worshipped for nearly 20 years, last year after the broadcasting of controversial sermons by his former pastor, the Rev. Jeremiah Wright, nearly sunk Obama's campaign.

"It's a very safe choice for Easter, given its historic relationship with American presidents. ... If you've been burned, you want to be cautious."

But Smith and others say the Episcopal congregation, which is predominantly white, will probably not become the home church of the nation's first black president.

Obama writes movingly of his experience in the black church in his memoir "Dreams from My Father," and a White House aide told the newspaper Politico last week that there is "something compelling to him about the African American worship tradition. ... He has made his perspective pretty clear."

Presidential aides have scouted about a dozen churches in this city looking for a good fit. But it's a challenge to find a congregation that not only meets the first family's spiritual needs but also can accommodate a popular president and his considerable security detail, according to the White House.

Nearly any choice Obama makes will have political ramifications – including choosing no church at all, says Smith. Religious conservatives, a constituency Obama has gone out of his way to court, are already disappointed with the president for opening funding for international family planning and embryonic stem cell research, as well as possibly rescinding the so-called conscience protections for healthcare workers.

"If you don't attend church it just adds another layer on there," said Smith.