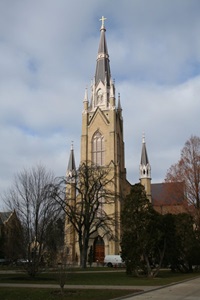 President Obama's planned commencement speech at the University of Notre Dame continues to spark controversy, as the local Catholic bishop said he will boycott the event because some Obama policies contradict church teaching.

Bishop John D'Arcy of the Diocese of Fort Wayne-South Bend (Ind.) said Tuesday that "as a Catholic university, Notre Dame must ask itself, if by this decision it has chosen prestige over truth."

"President Obama has recently reaffirmed, and has now placed in public policy, his long-stated unwillingness to hold human life as sacred," D'Arcy said, "and has brought the American government, for the first time in history, into supporting direct destruction of innocent human life."

The young Obama administration has upset Catholic leaders by opening federal funding to international family planning groups and embryonic stem cell research, as well as proposing to rescind conscience protection rules for health care workers that were instituted by the Bush administration.

The Cardinal Newman Society, a watchdog for Catholic orthodoxy on college campuses, has launched an online petition to stop Obama from speaking at Notre Dame that has reportedly gathered more than 100,000 signatures.

There are 67 million Catholics in the U.S.

"We fully expected some criticism and have received it, though nothing more than we anticipated," Dennis K. Brown, a spokesman for Notre Dame told Catholic News Service. "I can't foresee us rescinding the invitation."