His vision for world evangelization was "breathtaking" and his influence "globally seismic."
David Neff|May 23, 2009 06:49 AM 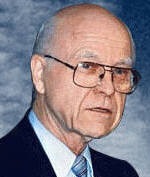 Veteran missiologist Ralph D. Winter passed away.last Wednesday, May 20. (Hat tips to @jhgrantjr and @edstetzer for alerting us via Twitter.)

According to the US Center for World Mission website, Winter died peacefully at home in Pasadena, California, "surrounded by three of his four daughters, his wife Barb, and a few friends."

Winter had been battling cancer and had been weakened by radiation treatments. He was 84.

In 2005, Winter was named by Time magazine as one of America's 25 most influential evangelicals. His speech at the 1974 Lausanne Congress on World Evangelization is credited with focusing evangelical mission activity on "unreached people groups."

Even at 80, Winter generates new strategies from his California-based Frontier Mission Fellowship.

Trained as a civil engineer, linguist, cultural anthropologist and Presbyterian minister, he describes himself as a "Christian social engineer." Working through the William Carey International University and the U.S. Center for World Mission, which he founded, he is producing a new generation of Christian message carriers, some native, ready to venture out to places with such ready-to-be-ministered flocks as Muslim converts to Christianity and African Christians with heretical beliefs. Says Winter: "It's this movement, not the formal Christian church, that's growing. That's our frontier."

An abundance of information is available at ralphwinter.org, including a timeline of "milestone events" and an extensive autobiographical account of his engagement with modern missions and missiology.

Also worth reading: Pastor John Piper's personal tribute to Winter. "His vision of the advance of the gospel was breathtaking," writes Piper, calling Winter's emphasis on unreached peoples "globally seismic in the transformation of missions."