A new study suggests that evangelicals are the most likely religious group to justify torture. Around 60 percent of evangelicals said use of torture against suspected terrorists can often or sometimes be justified, compared to 50 percent of Catholics 46 percent of white mainline Protestants who said the same thing, according to a survey conducted by the Pew Forum on Religion and Public Life. David Neff takes a look at the survey over at CT's liveblog.

Meanwhile, the latest national survey suggest that overall support for legal abortion is down 8 percent from last August. Just 23 percent of white evangelical Protestants now favor legal abortion, down from 33 percent in August and mid-October and 28 percent in late October. 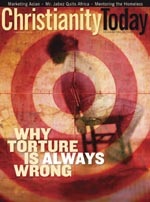