Did you miss 60 Minutes last night? If you did, you missed Morley Safer's interview with James Cameron and their discussion of his upcoming 3-D film, Avatar. They talk about everything from Cameron's origins story to his plans after the release of his $400 million dollar, three hour epic sci-fi film. If you didn't see it on a large, HD television, this video will give you only the slightest inkling of how utterly breathtaking the film looks.

Check it out after the jump. 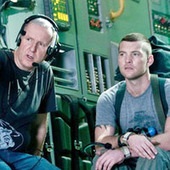