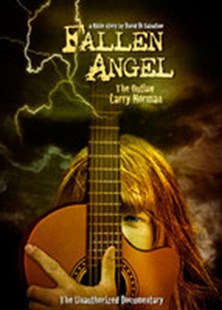 David DiSabatino, director of a new documentary about the late Larry Norman, said in a recent e-mail that his film, Fallen Angel, has "obtained a commitment from a documentary niche-marketing specialist" to bring the film to "a number of theaters in early 2010."

The company, Abramorama, most recently distributed Anvil: The Story of Anvil, which received high critical marks.

Critical response to Fallen Angel is somewhat lacking, except for a few things that had been written about earlier versions of the film – which I saw about a year ago. DiSabatino took some of those early criticisms to heart and apparently has done some heavy editing on the film, and says the new version has a much different vibe than the original. (The first version – available here – was a choppy and a bit too dark, though there were certainly some dark sides of Norman that had to be explored. DiSabatino says the edited version is lighter, but doesn't gloss over Norman's problems, many of which he brought on himself.)

DiSabatino also reports that "the legal wranglings that went on behind the scene are over and we have prevailed. For those of you that do not know, after the Cinequest festival [where Fallen Angel screened in March] we were threatened with a copyright infringement lawsuit by the Norman family. We responded by petitioning the courts to judge whether we had fairly and legally used the materials in the film. We prevailed in the case and found out that much of what was contested wasn't even owned by those protesting."

CT Movies plans more coverage, including a review, of the film in the months ahead, so stay tuned. Meanwhile, learn more about Fallen Angel at the official site, and watch the trailer here: