The Family Research Council, joined by prominent Republican allies, is mounting an aggressive defense to a decision by the Southern Poverty Law Center to designate the powerful conservative lobby as a hate group.

"The group, which was once known for combating racial bigotry, is now attacking several groups that uphold Judeo Christian moral views, including marriage as the union of a man and a woman," reads a Wednesday (Dec. 15) FRC ad placed in the print editions of Politico and the

The ad follows a November 22 report from the Alabama-based civil rights watchdog adding the FRC and four other conservative ... 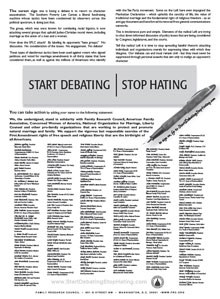