Some have questioned why Ken Hutcherson, well-known for his pro-marriage stand, officiated.
June 18, 2010 09:16 AM

Rush Limbaugh's June 5 marriage to girlfriend Kathryn Rogers has generated a lot of discussion. Much of it is about his surprise reception singer, Sir Elton John — but a few people have commented on his choice of pastor.

"He had asked me to come to the wedding, and his uncle, Judge [Stephen] Limbaugh, was supposed to do the entire service, and there were some complications," Hutcherson told CT.

Judge Limbaugh could not solemnize a marriage in Florida, so Rush asked Hutcherson to make it official.

"Uncle Steve led it off, and then the Hutch, in his own inimitable way secured the deal," Limbaugh told his audience on his June 15 radio show.

Some have questioned why Hutcherson, well-known for his pro-marriage stand, would preside at the thrice-divorced Limbaugh's Palm ... 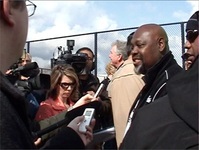