The Gay & Lesbian Alliance Against Defamation (GLAAD) is praising Sojourners for passing its test. GLAAD sponsored an advertisement for the Ali Forney Center, a homeless shelter that aids lesbian, gay, bisexual, or transgender (LGBT) youth. The advertisement was, in part, a test of whether Sojourners would print an ad sponsored by a group like GLAAD.

In May, Sojournersdeclined to place an advertisement for Believe Out Loud, an organization that advocates for greater acceptance of LGBT individuals by churches. The video ad featured two women with a child entering a church where they were not welcomed by parishioners.

GLAAD's director of religion, faith, and values Ross Murray approached Sojourners after the Believe Out Loud decision. GLAAD asked if the magazine would be opposed to advertisements by LGBT organizations who focus on one of Sojourners areas of focus and the organization agreed, according to Murray. 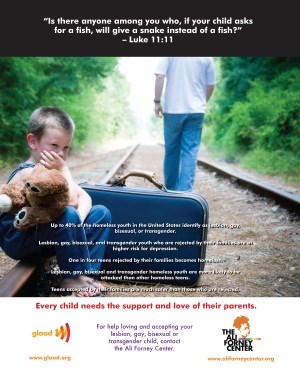