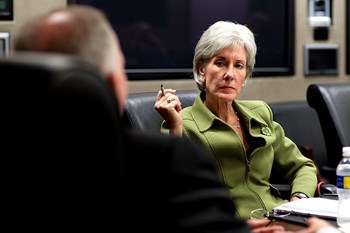 Opposition to Sebelius began before she even entered the administration.

"It is a sad day for America and for America's unborn children that Governor Sebelius, who is no friend to those unborn children, has been confirmed as secretary of Health and Human Services," Richard Land, president of the Southern Baptist Ethics & Religious Liberty Commission, said back in 2009.

Since then, distrust and criticism of Sebelius has grown. The new health care law expanded the power of the head of HHS.

But this December, social conservatives have been surprised by some small Christmas miracles.

On December 7, Sebelius rejected the Food and Drug Administration's (FDA) recommendation to make the emergency contraception Plan B One-Step available as an over-the-counter drug without an age limit. Sebelius said the drug would still be available behind the counter but would not be available to girls 16 years old or younger.

Harvard University's Daniel Carpenter wrote in the New York Times, "For the first time in American history, a cabinet secretary — and by extension, a president — has overruled a drug-approval decision by the Food and Drug Administration."

Fourteen members of the Senate Democratic caucus wrote an open letter asking Sebelius to justify her decision based on scientific evidence.

"We feel strongly that FDA regulations should be based on science. We write to you today to ask that you provide us with the rationale for this decision," the Senators wrote. "Nearly half of all pregnancies that occur in the United States each year are unintended. Keeping Plan B behind the counter makes it harder for all women to obtain a safe and effective product they may need to prevent an unintended pregnancy."

In her statement announcing her decision, Sebelius said, "I do not believe enough data were presented to support the application to make Plan B One-Step available over the counter for all girls of reproductive age."

"Sebelius might not have made her decision for the same fundamental reasons I reject Plan B, but nevertheless, she stood with parents and gave innocent girls and perhaps their unborn babies the gift of a healthy life this Christmas season," Nance said. "[Her] decision was a gift. And whatever her motives, I suspect that she'll be getting a little less coal in her stocking this year."

Family Research Council's Jeanne Monahan said, "A decision to make Plan B available for girls under the age of 17 without a prescription would not have been in the interest of young women's health. [Sebelius] was right to reject the FDA recommendation to make this potent drug available over the counter to young girls."

Sebelius also found some unity with conservatives on the issue of adoption. As part of National Adoption Month, Sebelius participated in an annual White House conference that brought together government and nonprofit groups who work on adoption. Sebelius spoke on the changes in adoption policies during the Obama administration. This fall, the president and Congress were able to work together on the Child and Family Services Improvement and Innovation Act. Sebelius said the president wants to extend and increase the Adoption Tax Credit that was initiated in 2003. This tax credit provides over $13,000 to families who adopt.

In a statement on National Adoption Month, the President said there are over 100,000 children in America who await adoption.

"Parents are moved to adopt for reasons as unique and varied as the children they embrace, but they are unified by the remarkable grace of their acts," Obama said. "Adoptive families come in all forms.  With so many children waiting for loving homes, it is important to ensure that all qualified caregivers are given the opportunity to serve as adoptive parents, regardless of race, religion, sexual orientation, or marital status."

The conference included religious institutions, including some with conservative beliefs on the family. Focus on the Family's Kelly Rosati said that on issues surrounding adoption, government agencies are more willing to work with faith-based groups like her Wait No More organization.

"There were people in the room that day that feel very differently than we do about many things like life and marriage and other things, but actually there is an interesting amount of agreement among us all that children deserve families and that as a country we can do better and we must do better for them," Rosati said.