This month marks the 44th anniversary of the Loving v. Virginia, the landmark U.S. Supreme Court case that struck down state laws prohibiting interracial marriage. A 1968 Gallup poll found three-quarters of whites disapproved of a whites and blacks marrying. Today, opposition to interracial marriage is low, but it still lingers. Among religious groups, evangelicals remain the most opposed to interracial marriage, according to a poll by the Pew Research Center for the People and the Press (Pew).

Pew's February Political Typology Poll asked people about recent trends in American society. Pew asked if "more people of different races marrying each other" was good or bad society. Overall, only nine percent of Americans said it was bad for society. However, 16 percent of white evangelicals said this, more than twice the opposition found among other Americans (7 percent). The survey found that 27 percent of Americans overall said more interracial marriage was good for society, compared to 17 percent of evangelicals. 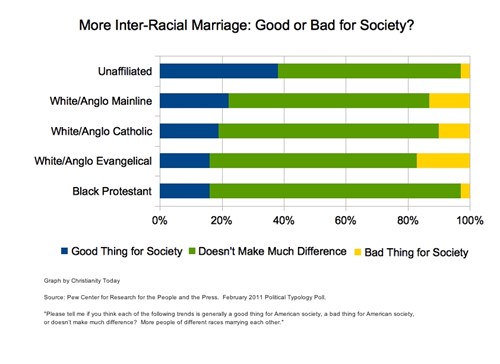 Evangelicals may have the most negative view of interracial marriage, but there is also opposition among white mainline Protestants (13 percent) and Catholics (10 percent). Statistically, the percentages in these traditions who saw interracial marriage as bad for society were about the same as for evangelicals.

The views of white Christians stand in stark contrast to two other groups: black Protestants and those with no religion. Only three percent of either group said interracial marriage was bad for society. Eight-in-ten respondents said the trend "doesn't make much difference."  Those who are not religious were more optimistic, with 38 percent saying it was good for society.

Such a poor view of interracial marriage comes despite its near universal acceptance—even celebration—among evangelical leaders even as they acknowledge sensitivity to the issue. For example, in a 2005 sermon, John Piper of Bethlehem Baptist Church in Minneapolis said, "interracial marriage is not only permitted by God but is a positive good in our day. That is, it is not just to be tolerated, but celebrated."  He followed this by noting that the issue remained "extremely controversial since it is opposed by people from all sides."

Bob Jones University removed its rule against interracial dating in 2000; the university apologized for this and other racist policies in 2005.

Today, the issue of interracial marriage is most likely to be breached during debates over same-sex marriage. Ted Olson and David Boies released a video this month for the American Federation for Equal Rights (AFER). The video features the two lawyers (who argued successfully against California's Proposition 8) discussing Loving v. Virginia as the foundation for the argument for same-sex marriage.

Focus on the Family's Glenn Stanton said the video is emotionally persuasive but makes an invalid comparison between interracial marriage and same-sex marriage.

"Segregation was a profound social evil. Full stop," Stanton said. "Loving v. Virginia struck down a legal regime, peculiar to certain parts of the nation, that was wholly racist at its core … It was about nothing more than the racial purity of whites and all the ugliness that implies."