The U.S., Britain, and France led a military intervention to secure a no-fly zone over Libya last week after the United Nations Security Council authorized military force against Libya. Evangelicals appear to agree that President Obama could have done a better job handling the situation in Libya, but they disagree over whether the intervention is moral and the country's next step.

Sojourners president Jim Wallis said the U.S. military action in Libya was hypocritical because the U.S. is not taking similar actions in other countries like Sudan, Bahrain, or Yemen. He mocked the claim that the motivation was a humanitarian crisis. 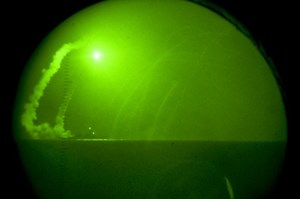 "Darfur doesn't have [oil]. Bahrain does, along with a huge U.S. naval base. And the Saudis, who have come in to crush the democratic protests in Bahrain for their good friends in the royal family, have all the oil. Obviously, no humanitarian concerns there," said Wallis. "It's amazing how consistent U.S. foreign policy is from administration to administration, and how little changes when we elect a new president."

Richard Land, president of the Southern Baptist Convention's Ethics & Religious Liberty Commission, supported the no-fly zone, but he said America should have unilaterally made this move much earlier.

"At least in the end we're doing the right thing. I just hope and pray that it's not too late because Gaddafi murdering his fellow citizens, butchering them, is what the world looks like without U.S. leadership," Land said on his weekly radio program Richard Land Live! Land said that Qaddafi should be killed for his actions. "Mr. Qaddafi needs to be tried and found guilty of crimes against humanity including the Lockerbie bombing and then he needs to be hung as the war criminal that he is."

For Bryan Fischer of the American Family Association, the ethical standard for evaluating military policy is the U.S. Constitution and national security. He said that the only justifiable action against Libya would be to kill Qaddafi for his role in the bombing of an airliner over Lockerbie, Scotland that killed hundreds of Americans.

"Once Congress issues a 'letter of marque and reprisal' for Gadhafi's scalp, we can - and should - take it any way we can. Blowing his compound to kingdom come with him in it would be one way," said Fischer.

Faith in Public Life provided a list of the criteria of ethical military action under Just War Theory, comparing how it views U.S. action in Iraq and in Libya. Its analysis also leaned toward the military action in Libya being just, but not for the Iraq war.

Military action must comply to Just War Theory, BreakPoint's Chuck Colson said. "I can't imagine a more just and proportional response to the massacre of innocent people than to establish a no-fly zone. So I was mystified and chagrined by our nation's inaction."

On its webpage posting Colson's commentary on Libya, BreakPoint linked to a column by Bryan Cones at U.S. Catholic, who evaluated the military action by the traditional criteria of Just War Theory. Originally, Cones concluded, "straight moral calculus leans in favor of military intervention in this case."  But Cones updated his view after seeing the campaign in action.

"My natural suspicion about the use of military action in Libya has been deepened by the scale of the bombing (see proportionality below), which has included more than 100 Tomahawk cruise missiles and multiple attacks against Libyan infrastructure well away from the besieged civilians of Benghazi (see just cause)," said Cones. "Add to it the discovery that most Libyan oil goes to Europe, led by France and Italy and Ireland (see right intention), and this action starts to struggle to meet just war criteria."