Occupy Wall Street began with just a few dozen protesters. Over the past two weeks, the number of protesters has increased, with participants living day and night near Wall Street. On Sunday, 700 protesters were arrested when they tried to cross the Brooklyn Bridge; another two dozen were arrested Sunday for disorderly conduct. This week, Sojourners joined anti-corporation movement and is looking for God in the midst of the protest. 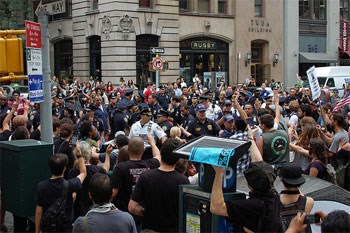 Occupy Wall Street may be a momentary political side-show, but it has the potential of becoming the Left's answer to the tea party. Both are protest movements aimed at changing who holds power in American politics. The tea party took aim at government overreach; Occupy Wall Street points to the power of corporations. The protestors say they are allies of people "wronged by the corporate forces of the world." They are seeking to reduce the power of corporations which, they say, "place profit over people, self-interest over justice, and oppression over equality, [and] run our governments."

Tim King, Sojourners communications director, joined the protests. He is sleeping in the park and blogging about his experiences. He said one of his goals is to look for God's presence amidst the event.

"I believe it's often easier to find God on the streets than in a sanctuary," King said. "We serve a God who shows up for those in need, and for those who stand with them."

He reported that there are Christians at the event and that many of the protesters are open to religion.

King said, "Many protesters here have had some bad experiences with religion, but it's clear that they are genuinely open to seeing religion done differently."

Also, like the early tea party protests, Occupy Wall Street is heavy on pointing out the problem (i.e., corporations) rather than articulating a set of policy proposals or goals.

BreakPoint's John Stonestreet said that the message of the protests is that "things are broken—Wall Street, the environment, society, the list of complaints goes on and on. Their solution? Well, none have been offered." He compared this to BreakPoint's recent Do the Right Thing movement, which "identifies that the central problem is an ethical collapse."

Columbia University sociology professor Courtney Bender said that media reports have missed the religious dimension of the protests because they are looking for either cooperation from churches and organized religion or focusing on alternative religions.

"This pair of reportorial strategies provides familiar but unhelpful ways to consider the religious dimensions of the occupation. In fact it makes it possible to overlook the varieties of spiritual symbols, performance, actions and discourse—not to mention religious and spiritual networks and communication webs—that energize events in Zuccotti Park and elsewhere," Bender said.

Sojourners president Jim Wallis said the purpose of Occupy Wall Street is still developing, but he is interested in what he has seen so far.

"People's frustrations, hurts, and feelings of being betrayed by our nation's politicians and economic leaders are clear. They want to be heard," Wallis said. "There is a lot of speculation as to who the ‘Occupiers' are and what they might accomplish. There is much I still don't know about the movement, but undeniably it has caught the imagination of a generation—and that matters."

Wallis encouraged people to help the protesters in New York and in other cities by ordering a pizza or bringing a meal.

He is planning on visiting the New York protests today. "They are carrying on the most interesting conversation going on in that city—or any other—right now. Besides, I love a good potluck or pizza party where people imagine a better world," Wallis said.