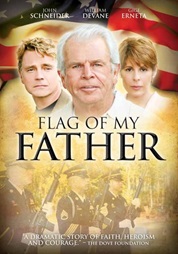 There are far too many film festivals to keep up with these days, but one of the most unique is the G.I. Film Festival, with movies solely dedicated to the service of the American Armed Forces.

The winner of this year's Best Narrative Feature, Flag of My Father (R2 Productions), is a thoughtful and occasionally stirring look at what it means to be a war veteran, to deal with post-traumatic stress disorder, to negotiate the land mines of family feuds and jealousies, and to share a bond with other vets that only vets can understand. And finally, to walk such a difficult road as a Christian, with that "peace that passes all understanding" in the face of all difficulties, whether it's an ambush in Iraq or a personal attack from family members.

Former TV star John Schneider (Dukes of Hazzard) stars in yet another faith-based film, but he's not the one touting Christianity this time. He plays one of four brothers – the smarmy, sarcastic, heavy drinking one, at that – to Judith (GiGi Erneta), an Iraqi vet who served as a nurse and army captain. The four guys just don't "get" their younger sister, who shares a bond with their father (William Devane), a Vietnam vet, that their brothers just don't understand.

When a difficult event strikes the family, the tension intensifies until another situation opens the eyes of all involved to the truth of the matter. It's not a great movie, but it's not bad either, and I would say it's almost a must-see for families with a vet in their midst.

To order the film, click here. And here's the trailer: