Sam Childers, subject of a new movie, is accused of neglecting children at his orphanage in South Sudan.
Mark Moring|September 22, 2011 01:14 PM

While Sam Childers travels around North America promoting Machine Gun Preacher, a movie opening tomorrow based on his life story, the orphanage he founded in South Sudan is under fire from the community and local government for alleged neglect of the nearly 150 children who live there.

Witnesses have said that the children at Shekinah Fellowship Children's Village are malnourished, unhealthy, and unhappy. Several locals—including pastors, government officials, and a high-ranking member of the military—tell Christianity Today that Childers has exaggerated or outright lied about his work in the African nation.

Community leaders want his orphanage in Nimule—near the border with Uganda—to be shut down immediately, and for local ministries to take over. In a September 2 letter to Childers, 14 local leaders—including the man who says he gave 40 acres of land to Childers to build the orphanage—wrote that Chiders has "dishonored our agreement" to take care of ... 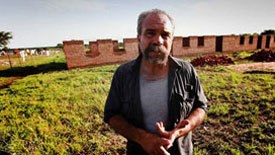