T.D. Jakes Embraces Doctrine of the Trinity, Moves Away from 'Oneness' View

AURORA, Ill. (BP) – Bishop T.D. Jakes says he has moved away from a "Oneness" view of the Godhead to embrace an orthodox definition of the Trinity – and that some in the Oneness Pentecostal movement now consider him a heretic.

Jakes – long a controversial figure among evangelicals because of his past unwillingness to affirm the Trinity – stated his belief Wednesday (Jan. 27) at the second-annual Elephant Room (theelephantroom.com), an event that brings together Christian figures from different backgrounds for what organizers call "conversations you never thought you'd hear." This year's Elephant Room was held at Harvest Bible Chapel in Illinois and was simulcast to other locations nationwide.

Jakes, founder and senior pastor of The Potter's House in Dallas, was the focus of a motion at Southern Baptist Convention annual meetings in 2009 and 2010 by a messenger who wanted LifeWay Christian Stores to stop selling his books. One was ruled ...

T.D. Jakes Embraces Doctrine of the Trinity, Moves Away from 'Oneness' View 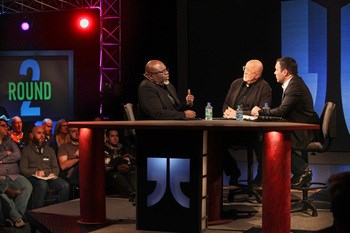