(Updated) Kentucky agrees to change its child-care system in settlement of a long-running case against a Baptist foster agency.
Jasmine Young|July 16, 2012 02:05 PM

Update (May 6): According to Religion Clause, a Kentucky court has rejected Sunrise Children's Services' most recent attempt to continue arguing its case after the state agreed to a settlement in March. Sunrise argued that the settlement terms "[impose] obligations on it without giving it the opportunity to litigate the merits further. The court however rejected this argument, saying that new obligations are not imposed on Sunrise."

Peter Smith at the Courier-Journal offers more details on why the Baptist foster agency fears stigma from the settlement.

Update (Mar. 21, 2013): Associated Baptist Press reports that the state of Kentucky finally has settled a 13-year-old lawsuit with the Americans United for Separation of Church and State and the ACLU, agreeing to "change its child-care system to ensure that faith-based groups that contract with the state do not pressure children in their care to participate in religious services."

According to the ACLU, "Child-care agencies that contract ... 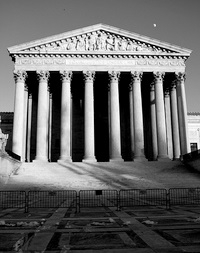 Can Taxpayers Challenge State Funding Of ...