Rhode Island lawmakers hope to avoid future litigation over religious icons on public property by creating a commission to catalogue public icons that have lost their religious significance.

House Bill 8143 Sub A, which passed into law last week without Gov. Lincoln D. Chafee's signature, gives the green light for creation of the "Category One Memorial Designation Commission" to identify and protect properties with "secular traditional, cultural, or community recognition and/or value."

The legislation was crafted in response to recent controversy over a white memorial cross on display in front of the Woonsocket Fire Department headquarters (pictured above). The cross faces potential litigation and will likely be moved.

Last month, the Wisconsin-based Freedom From Religion Foundation sent a letter to Woonsocket mayor Leo Fontaine arguing that the cross, erected in 1921 as a World War I memorial, violates the separation of church and state since it is located on city property. 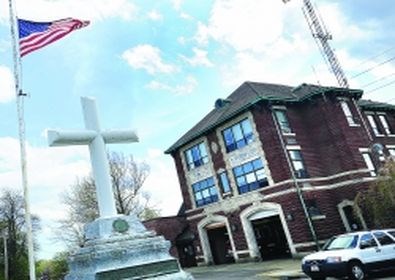