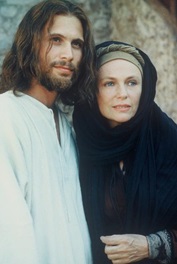 It's been almost six years since we posted our list of Top Ten Jesus Movies, but it still gets a surprisingly high amount of traffic every month. Apparently there are a lot of people who want to know what are the best movies about the Son of Man. (FWIW, our Top Ten Movie Robots list, seven years later, also still gets a lot of hits every month.)

One of those Top Ten Jesus flicks was a TV miniseries simply titled Jesus, which aired on CBS in 2000. Starring Jeremy Sisto in the title role, the film was "kind of like The Last Temptation of Christ without the heresy," our top 10 listmaker, Peter T. Chattaway, wrote. "That is, it presents Jesus as a haunted and vulnerable human being who struggles with romantic attractions (to Mary of Bethany, this time) and a growing awareness of his destiny—but instead of fleeing God, he always chooses God's will for his life. Some viewers found Jeremy Sisto's interpretation of Christ a little too casual and buddy-ish, but this is one of the few Jesus films to understand that being human is about more than having emotions and dancing at parties; it is about finding God's will, and following it to the best of our ability. Note also the scene where Satan visits Jesus in Gethsemane and, taunting him with visions of nations and churches committing atrocities in Jesus' name, tries to convince him his death on the cross will be in vain; this is a far more sobering 'last temptation' than anything imagined by Martin Scorsese."

Sisto is joined by an impressive cast that includes Jacqueline Bisset as Mary, Debra Messing as Mary Magdalene, and Gary Oldman as Pontius Pilate. The film will air on GMC three times (all times Eastern): April 1 at 7 p.m., April 6 at 9 p.m., and April 8 (Easter Sunday) at 1 p.m.