(Updated) After 215 days of imprisonment, the pastor has been moved to solitary confinement as punishment.
Erin Roach - Baptist Press|April 19, 2013 06:35 AM 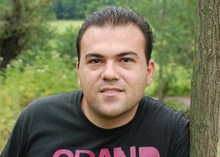 Update (May 10): Abedini has been released from solitary confinement. Supporters have sent more than 50,000 letters of encouragement to his prison.

Update (April 29): Along with nine other prisoners, Iranian-born U.S. pastor Saeed Abedini has been placed in solitary confinement, the American Center for Law and Justice reports. The move is believed to be retaliation for prisoner-staged protest against poor conditions.

Abedini, who has been in prison for 215 days following his arrest last fall, faces badly deteriorating health, including severe internal bleeding and kidney issues.

(BP) Iranian officials have pressured imprisoned pastor Saeed Abedini to renounce his faith in Jesus even as they have stepped up their physical abuse and psychological torture of him, including taking him to a hospital but denying him medical treatment, according to recent reports.

In a letter obtained by the American Center for Law and Justice (ACLJ), Abedini–a U.S. citizen of Iranian descent–wrote that he was told by Iranian prison officials, "Deny your faith in Jesus Christ and return to Islam or else you will not be released from prison. We will make sure you are kept here even after your 8 year sentence is finished."

Abedini's response, he wrote, is Romans 8:35-39, which says persecution and death cannot separate a believer from Christ.

"The reality of Christian living is that difficulties or problems do arise in our lives," Abedini wrote. "Persecution and difficulties are not new occurrences, but are seen often in the Christian life. It is through the suffering and tribulations that we are to enter the Kingdom of God."

The pastor closed the letter, ACLJ said in a news release April 10, by writing, "Pastor Saeed Abedini, the servant and slave of Jesus Christ in chains, with a lot of joy to see you soon. Evin Prison 9th March 2013."

Jordan Sekulow, ACLJ's executive director, said it's clear that Abedini's faith is sustaining him even as he suffers from increased brutality at the hands of prison guards.

Sekulow reported April 15 that Abedini's Iranian family visited him in prison that day and saw firsthand the marks and symptoms left by a severe beating he received when officials took him to a hospital the previous week.

After being promised medical care for internal bleeding caused by repeated abuse, Abedini, a naturalized U.S. citizen, finally was granted a hospital visit but then was taken away without receiving treatment, being told the specialist he was to see was not available.

"These beatings and the internal injuries are causing Pastor Saeed frequent fainting spells," Sekulow wrote. "Iranian officials are telling Pastor Saeed it could be an additional two months before he will receive medical treatment. Such a delay is inhumane and a gross violation of Iran's international obligations."

Additionally, Abedini told his family that cellmates recently threatened to suffocate him in his sleep and make his death look like an accident, a risk that weighs heavily on him.

"I cannot express in words how concerned I am about Saeed's physical and mental health," his wife, Naghmeh Abedini, said. "He is now continually attacked and threatened. The Iranian government should know that we are watching and aware of what they are doing to Saeed inside Evin prison. We need to speak louder until Saeed is home safely on U.S. soil."

In an effort to bolster the pastor's morale, ACLJ, which is representing his wife and two children in the United States, launched a letter writing campaign to send as many encouraging notes as possible to Abedini for his 33rd birthday May 7.

"We want Pastor Saeed to know that he is not forgotten and thousands upon thousands of people are fighting for his freedom," Sekulow said.

The effort quickly became one of the largest letter writing campaigns in history, with more than 33,000 people sending letters of support as of April 15. Letters can be written at SaveSaeed.org.

"It is also an important opportunity to let Iran know that we will not forget about this persecuted pastor," Sekulow said. "Iranian officials will be reviewing and paying attention to these letters. They will feel the incredible pressure of the world community calling for Pastor Saeed's release."

Meanwhile, USA Today published an article about Abedini April 4, saying "a movement to free him is gaining momentum."

That movement, the newspaper said, got a boost from comments by Secretary of State John Kerry "that gave a nod to U.S. allies to quietly intervene."

Kerry's call for Iran to release Abedini encouraged U.S. allies that have diplomatic relations with Iran to push the Islamic regime to release him or get him medical treatment, USA Today said.

Faraz Sanei, an Iran specialist for Human Rights Watch, told the newspaper that the regime views converts as a threat to the orthodox Shiite religion propagated by the government.

"Since the election of President Mahmoud Ahmadinejad in 2005, authorities have cracked down on many religious and spiritual movements that draw young people away from the Shiite faith, including evangelical Christians and the more numerous Sufis, Bahai and self-help spiritual practitioners, who have grown in popularity under the repressive Islamic regime," USA Today reported.

Sanei said, "The government feels threatened by these movements because it threatens their hold and grasp on the population."

In the same article, Rep. Chris Smith (R.-N.J.), emphasized the importance of a case such as Abedini's becoming a priority for the U.S. government.

"No administration, even dictatorships, wants to be subjected to any kind of embarrassment," Smith told USA Today. "When issues are prioritized by the United States, it makes a difference.... [That strategy] works with radical Islamic regimes. It worked with the Soviets and with Nazi Germany under Adolf Hitler."