Removal of “conscience clauses” ratified in response to growing acceptance of women clergy
Abby Stocker|June 28, 2013 11:12 AM

The Reformed Church in America (RCA) officially eliminated a policy allowing its members to object to the ordination of women this past week. While the church originally allowed members to conscientiously object to the ordination proceedings, the removal of the "conscience clauses" from the RCA's Book of Church Order means that clergy can no longer refuse to participate in a woman's ordination on the basis of her gender.

The RCA, which first began ordaining women in 1979, initially accommodated members' opposing views on women clergy by allowing that "If individual members of the classis find that their consciences, as illuminated by Scripture, would not permit them to participate in the licensure, ordination or installation of women as ministers of the Word, they shall not be required to participate in decisions or actions contrary to their consciences, but may not obstruct the classis in fulfilling its responsibility to arrange for the care, ordination, ... 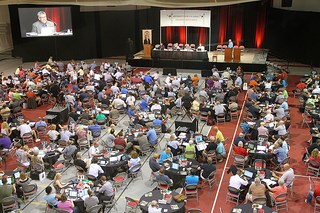